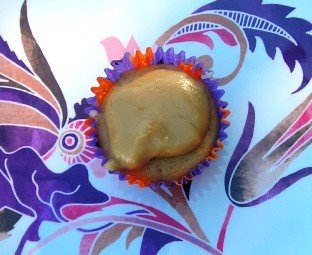 Directions:
Preheat oven to 350. Grease or line 12 cupcake wells. In large bowl, cream together butter and sugar. Add eggs, beat well. Add the baking powder, cinnamon and salt. Stir. Add the flour alternatly with the apple cider until throughly combined. Pour into prepared cupcake pan, filling each cup 3/4 way full. Bake 20 minutes or until a toothpick inserted in the center of the center cupcake comes out clean.

It’s apple cider time again. We bought a jug yesterday and I thought it would be fun to do something with it besides just drinking it. I had heard of (but never have had the good fortune to taste) apple cider doughnuts and felt the next logical evolution of apple cider baked goods should be cupcakes. They are suprisingly light and fluffy. I was worried that you wouldn’t be able to taste the apple cider but you really can and tell that it is apple cider (which I like) and not apple juice (which I don’t).