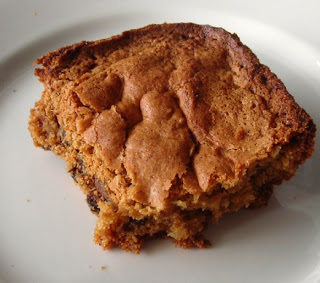 Preheat oven to 350. Grease and flour or spray with cooking spray with flour one 8 inch square baking pan. In a large bowl, combine all ingredients and mix throughly, about 2-3 minutes. The batter will be rather thick. Scrape batter in pan. Bake 40-50 minutes or until toothpick inserted into the middle of the pan comes out almost clean. The blondie will set up as it cools. Cool in pan on wire rack 10 minutes then remove from pan to continue to cool. Serve at room temperature or slightly above.

Back on January 22nd, I found out that it was National Blonde Brownie Day and I haven’t been able to get blondies out of my head since. It is really only in the last year or so that I have even had a blondie but I already think I like them better than brownies. My favorite kind of brownies are more than just straight brownie, like the cheesecake brownies I made a while back. Blondies are a lot easier to make, are easily doctored and generally require a lot less butter* than brownies which is odd considering that blondies derive most of their flavor from butter. Not that blondies are health food, but I like to keep that level of butter consumption to a time that is a bit more celebratory, not just a sweets craving.

*These blondies only use 6 tablespoons (less than 1/2 a cup) to make a 8×8 inch pan worth while a recipe for the same amount of brownies generally calls for a full cup of butter.