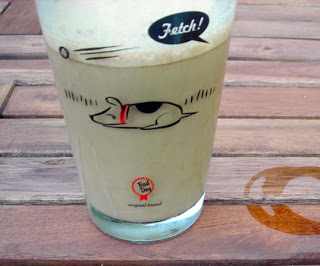 Directions:
In a small bowl or measuring cup, whisk together the cocoa, allspice and cinnamon to remove any clumps. Then pour the Guinness into a large cup (larger than you’d think, this will foam) and gently stir in the spiced condensed milk. Serve immediately. Serves one.

We watched the first season (or “series”) of the BBC show Chef!

recently. In one episode, the French-trained Chef tries to impress his Jamaican born father with an authentic Caribbean meal. The problem is that Chef knows nothing about Caribbean cooking and has to turn to the lowest ranking member of the kitchen who had worked at his aunt’s soul food restaurant* and thus knows the cuisine. They made a variety of foods but what caught my attention was something I had never heard of-Guinness punch. Chef is skeptical of the recipe but allows the rooky chef to put it on the menu. Then much to Chef’s chagrin, throughout the whole rest of the episode anyone who sipped the drink swooned. A quick look online told me that this magical elixir is simply Guinness stout mixed with some spices and sweetened condensed milk. It sounds a little odd, but it is actually quite good and not as sweet as you might think. Of course, I used about 1/2 the usual amount of sweetened condensed milk I’ve seen in recipes and kicked up the spices, but it seems to be very close to authentic and much more drinkable.

*Apparently soul food restaurants sell Caribbean food in England, not food from the Deep South like it does in the US. Who knew?