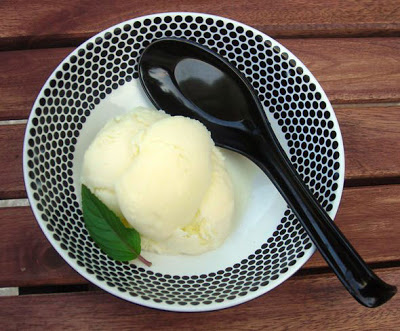 Directions:
One the day before you want to eat the gelato, allow the mint leaves to seep in the milk overnight in the refrigerator.

The next day: Pour the milk through a sieve into a saucepan. Scald the milk, then remove from heat. Meanwhile, beat the yolks and sugar together until fluffy. Whisk in a few tablespoons of the scalded milk, then add the egg/milk mixture into the remaining scalded milk. Return to heat on low, stirring occasionally and cook until the mixture coats the back of a spoon. Strain and refrigerate until cool. Add to a ice cream maker and churn until frozen and creamy. Remove to a freezer safe container and freeze until hard, about 1-2 hours. Allow to soften slightly before serving.

When we planted mint a few weeks ago I had it in the back of my mind that it might be fun to make some homemade mint ice cream. When it came down to it though, I decided to go the slightly lighter route and make gelato. Gelato is just as tasty but because it is made with whole milk and not heavy cream, has about a 1/3 of the fat. The slightly more subtle texture of gelato worked well with the fresh mint too, it ending up tasting very light and fresh rather than super rich, which really complimented the delicate flavor of the fresh mint. It was also exciting to use mint from the garden-it is the first “harvest” of the year!