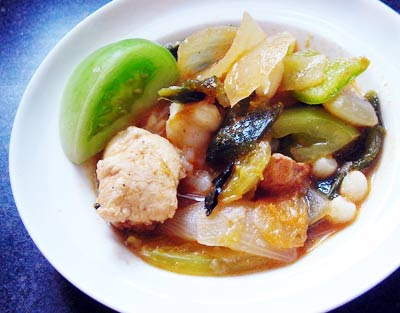 Directions:
Place the cubed chicken in a resealable bag. Sprinkle with lime juice, cumin and 1 teaspoon ground chipotle. Marinate 20 minutes. Meanwhile, place the poblano chiles in a heat safe dish and broil 5 minutes on each side. Remove to a towel and allow to cool, five minutes. Gently use a towel to remove the skins from the chiles, using a circular motion. Cut a slit down one side of each chile (or in the middle, if a split formed while removing the skin) and remove the seeds with as spoon. Discard the seeds. Cut up the chiles into 1/2 inch pieces. Saute the onion, red pepper flakes and garlic in olive oil until the onion is just translucent. Add the chicken, remaining spices and Anaheim chile and saute until the chicken is almost cooked through. The chicken should look white on all sides, but night still be slightly raw in the center. Stir in the poblano chiles, tomato, hominy and chicken broth. Cook covered for about 15 minutes, then remove lid and cook 15 additional minutes or until mixture thickens slightly.

*Some unripe tomatoes will be green on the outside and slightly pink on the inside. This doesn’t make much difference to the dish. 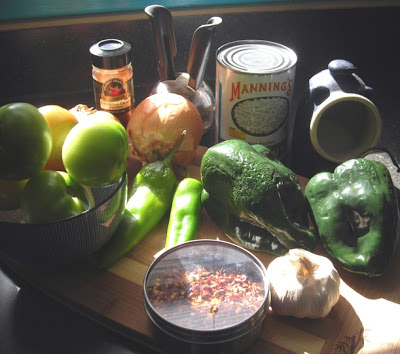 When I saw that Apartment Therapy: The Kitchen was hosting a green tomato contest I knew I had to give it a shot. I’ve fried green tomatoes and ripened them in paper bags but that was about it. I like the flavor of green tomatoes a lot so I thought this would be a good excuse to do some experimentation. The only problem was finding the green tomatoes. After an extremely violent storm in late Summer toppled our tomato plants we dug them up. But a quick call to my mom revealed that she had plenty of green (unripe) heirloom tomatoes still on the vine. I told her about the contest and when I picked them up she had them waiting in a paper bag neatly labeled “For Rachel ‘unfried’ green tomatoes”. So what to make with them? The weather has taken a turn towards the seasonal so I thought something warm might be in order: chili. The combination of the different peppers and spices give it a complex spicy flavor that the cool tartness of the green tomato tempers slightly.