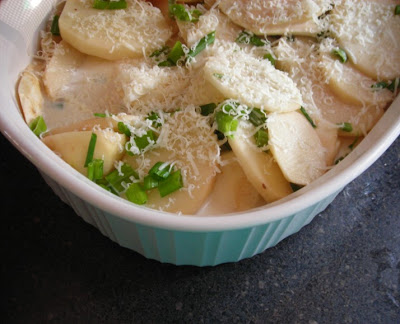 Directions:
Preheat oven to 375. In a small pot, bring the the cream, thyme and milk to a boil. Allow to cool (about 15 minutes) then strain. Discard the thyme. Stir in the nutmeg, green onions and salt/pepper to taste. Meanwhile, arrange the celeriac and potato slices in a lightly greased oven safe dish. Pour the milk mixture over the vegetables and sprinkle lightly with cheese. Cover and bake until the liquid is absorbed, about 40-45 minutes for a large dish, 20-25 for individual sized dishes, taking the cover off for the last 5 minute or so to brown the cheese. Serve hot.

*also known as celery root, it is large, warty and more than a little daunting looking. It smells and tastes faintly of celery. 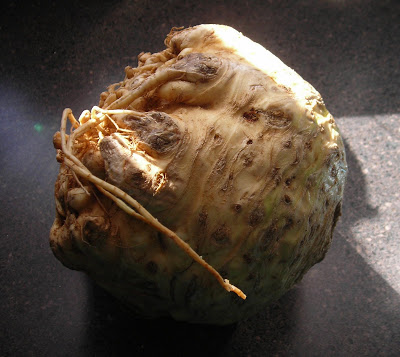 **Or a little or more potato. I kept it pretty equal to the celeriac.

First, I’d like to apologize that the picture for this isn’t of the finished product, it came out great (and attractive) but it was so dark out I couldn’t get a good shot. Anyway, I’d heard of celeriac before but I don’t think I’ve ever actually eaten it until today. I actually had never noticed in the store until recently and thought I’d give it a chance. It is sort of intimidating looking but has a similar texture when raw to potato, so I just treated it as such. I liked it a lot, it made an ordinary gratin something special. I can’t wait to use it in something else.

And if you aren’t tired of voting: my green tomato chili recipe is up for a little prize on Apartment Therapy: The Kitchen. The voting is here. The prize is a fun one!