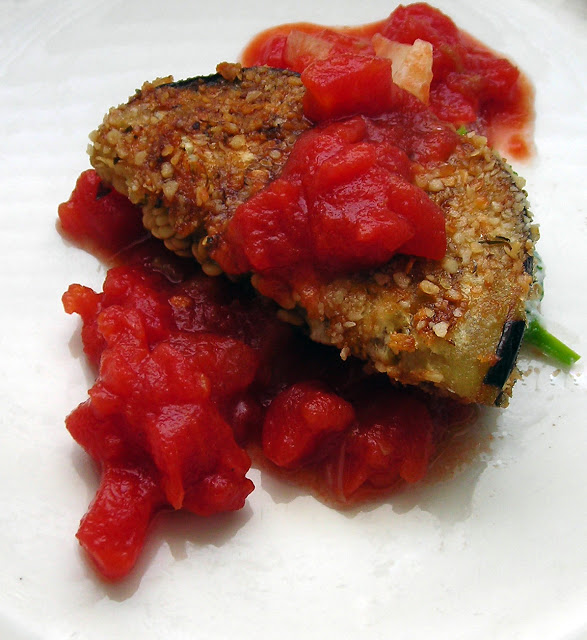 Directions:
WARNING: this recipe make a double batch of eggplant rollatini or about 8 servings, one to freeze and save, one to eat now.

First, make the sauce. Heat the olive oil in a medium saucepan. Saute the onion and garlic until fragrant. Add the tomatoes, salt, pepper and basil and simmer on low until heated through. Spread a layer of sauce over the bottom of two 9×13 inch pans. Set aside.

Second, mix together all of the filling ingredients in a large bowl. Set aside. Pour the remaining egg into a shallow bowl. Then mix together the matzo meal and the oregano in a second shallow bowl. Coat both sides of each eggplant slice in egg, then dip both sides in the matzo meal. Heat about a 1/4 inch of oil in a large skillet. Preheat oven to 350. I suggest coating all of the slices and stacking them on a plate so they are ready for frying before you fry your first batch. Fry each slice in the hot oil, about 3 minutes on each side, until golden. I was able to fry about 5 slices at a time in a single layer with ease. Immediately remove the slices to a paper towel lined plate, place another paper towel on top and allow to drain. Meanwhile, place the next batch of the eggplant in the pan and fry. While they are frying, place about a tablespoon of filling on top of one of the cooked eggplant slices from the first batch. Wrap the edges of the eggplant to enclose the filling. If the slice is on the small size you might end up with something that looks more like an eggplant taco than a complete circle. That’s okay. Place the eggplant rollatini seam side down on the baking pan. Repeat for remaining eggplant slices. By the end, both of the 9×13 inch pans should be filled with a single layer of the rolls. Top with remaining sauce and sprinkle with Parmesan. Cover one pan with foil and bake 30 minutes or until bubbly, remove foil and cook 5 additional minutes. Serve over pasta if desired. Cover the remaining pan (I like to use this freezable Pyrex container with lid) tightly and freeze. The night before you want to eat the frozen portion, place in the refrigerator to thaw overnight. The next evening bake according the above directions, adding a few additional minutes in the oven if the food is not totally defrosted.

Tip: The eggplant slices should be still warm when you roll them, if they are cold, they have a tendency to crack during folding. I found that by the time I got the next batch of slices frying, the first batch was cool enough to handle. If I worked quickly, stopping once to flip those that were frying, I could fill one batch in the time it took the next to cook. If you would rather not do two things at once, I suggest that after you drain the slices you cover them to keep them warm until you are ready to fill. 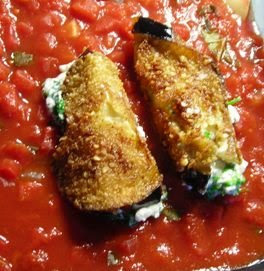 *Peeled in alternating strips. This helps the eggplant maintain its shape while remaining malleable. 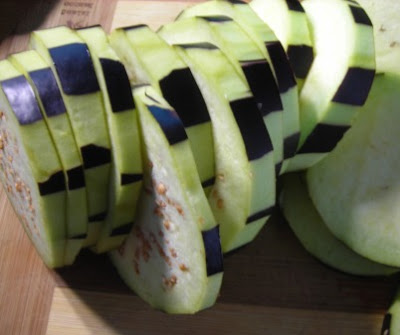 Rollatini is sort of a vegetarian version of involtini (meat rolls) that is a fun alternative to eggplant parmesan. It seems like more of a winter dish than one for early Spring but it has been freakishly cold and rainy so I’ve been sneaking some bubbly and warm from the oven dinners in while I still can.

As part of a recent assignment, I’ve been experimenting and developing recipes that have at least one component that can be made ahead of time. This recipe is a little more involved than what I plan to use for the project but the results were so delicious I couldn’t help but share it with you. It is a bit of work, but none of it is difficult and at the end you have two days worth of meals, one to eat now and one that simply needs reheating. I know a lot of people fear frying but in this case it is actually rather simple, the eggplant isn’t totally submerged in the oil so it is easy to flip the slices without splashing, making it more of an exercise in pan frying than deep frying. Just remember to keep the oil hot and drain the eggplant slices (on both sides!) immediately so they don’t soak up any oil while cooling. I added the rapini to sneak a little extra bit of vegetable into the mix and I am glad I did, the slight bitterness really really brightens the tomato sauce and keeps the cheese/eggplant combination from slipping into blandness.