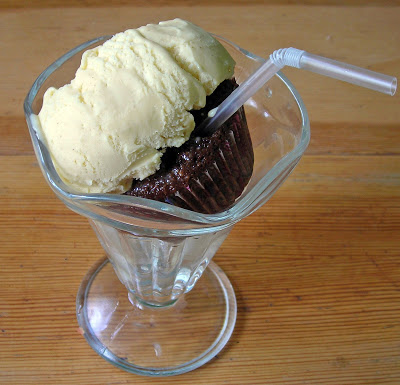 Directions:
Preheat oven to 350. Line or grease and flour 12 wells in a cupcake pan. Whisk together the root beer extract and milk. Set aside. In a large bowl, cream the butter and sugar. Add the egg, mix thoroughly. Add flour, baking powder and salt to the butter mixture. Pour the milk into rest of the batter and beat until well combined. Fill each well 2/3 of the way full. Bake 12-15 minutes or until a toothpick inserted the center of a cupcake comes out clean or with just one or two dry crumbs. Cool briefly in the pan, then remove cupcakes to wire racks to cool completely before topping with a scoop of vanilla ice cream right before serving. Eat immediately.

I have had the idea for root beer float cupcakes floating around in my head for ages but it wasn’t until Stef announced her ice cream cupcake round-up that I really put the idea in motion. The fact that I had some ice cream soda print cupcake liners, was the icing on the er, cupcake. 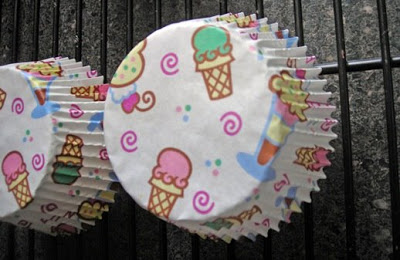 I have seen some recipes for root beer cupcakes or cake that call for actual root beer in the batter, but I worried that the flavor would be diluted during baking. I know when I developed the recipe for cuba libre cupcakes I ended up with a cupcake where while you could still taste the coke, the flavor wasn’t super strong. Of course for the cuba libre cupcake, a strong cola flavor wasn’t needed because I was going for a balance with the other flavors. For a root beer float cupcake, however, there needed to have a clear root beer flavor in the cake. So I turned to the root beer extract I use to make individual glasses of homemade root beer (using homemade club soda) and it worked wonderfully. It has such an authentic root beer flavor, you almost expect bubbles. Another added benefit of using the extract versus the actual soda is that the extract is unsweetened so you have greater control over how sweet the cupcakes end up. Using soda in baked goods is tricky if you don’t want something super sweet because if you are using a butter based recipe, you still need to add at least some sugar to cream the butter with and oil based cakes don’t have the texture I was looking for-moist with a soft crumb but sturdy enough to support a scoop of ice cream. This cupcake is sweet but not overly so, the focus is on the root beer.

I think these would be great to serve at a party or cookout because you don’t have to worry about icing them and they transport so well. Just bake them ahead of time and have the ice cream ready to scoop when you serve.