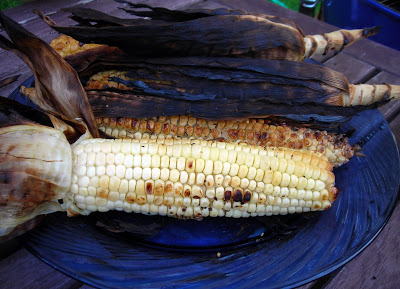 Directions:
Peel off outermost layers of husk, leaving just a few towards the center. Peel the husks of the corn back just enough to remove the silk but do not remove the husk. Discard the silk. Brush the kernels with olive oil and sprinkle with spices. Pull the husks back over the corn and secure the ends if needed. I used discarded husk as twine and used that to tie the husk shut. Place the prepared ears of corn on the grill, rotating the corn every few minutes. After a couple of turns, move the corn to the side of the grill and close the cover. Allow the corn to slowly continue cooking for another 10-15 minutes or until the kernels easily burst when poked with the tines of a fork. Remove the corn from the grill (the husk should be pretty much entirely blackened) and peel off the husk. Eat! 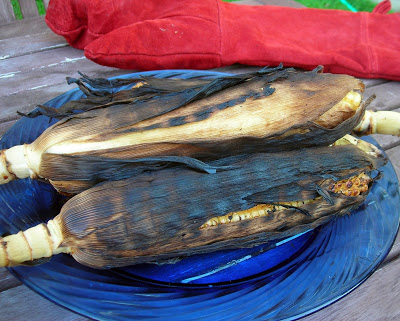 *Spice suggestions: smoked paprika, chipotle powder, kosher salt & pepper, Old Bay, McCormick’s GrillMates lemon & pepper seasoning or their garlic & onion, fresh lime juice, cumin, chili powder, cardamom, summer savory. I find that the spices that worked the best were the ones that were on the coarse side, they adhered well and delivered a lot of flavor.

I love making side dishes on the grill and this time of year, corn is it. This time I used summer savory on half of the corn and the lemon & pepper seasoning on the other half. The trick is to pick a spice that has a flavor that can stand up to the grilling, without overpowering the corn.