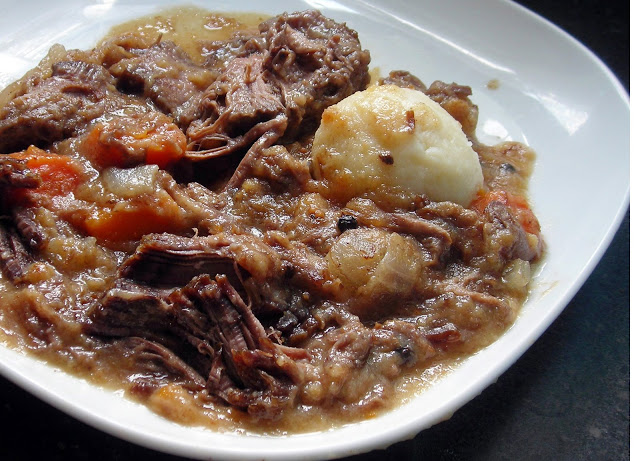 Directions:
WARNING: This part has to be done the day before you want to serve. Stir together all of the marinade ingredients in a nonreactive bowl. Place the roast in a nonreactive container (or large ziplock bag) and marinate overnight. The day before is also a good time to make the gingersnaps if, like me, you are using homemade.

During the last hour or so of cooking time: Start to make the dumplings. Bring a large pot of water to a rolling boil. In a large bowl, combine the cooled mashed potatoes and salt and the egg. Stir in the baking powder and add the flour in 1/2 cup increments until the it resembles a dough and the mixture holds its shape when molded (roughly 3 cups). Form into 2 to 4 inch balls. They should be able to hold their shape but not be too floury. Drop them into the water. They should sink, then rise to the surface when cooked through. Set aside.

During the last 1/2 hour of cooking time: Skim off any visible fat that may have risen to the top then add the gingersnaps and turn the heat to high.

After the time is up, shred the meat a bit with a fork or break it into pieces. Serve hot, with dumplings on the side.

Have an Instant Pot? I’ve created a new recipe that makes sour beef in just over one hour! Check it out here.

My grandpop loves sour beef and in turn so do I. Baltimore has strong German roots and some of the old food traditions continue today.

As a child my mother and I would sweet talk the ticket takers at the yearly German festival at Carroll Park to let us in (for free) just long enough to pick up a large order from our favorite stand to take home. Now you can buy bottles of Mrs. Minnicks’ sauce at the grocery store but freshly made is always best. Until I made this, I had never made sour beef before but after a year of watching beef prices* I finally found a good deal on some meat suitable for cooking for a long time and decided to take the plunge.

Here in Baltimore, it is traditional to make the sour beef with gingersnaps. I know some people sneer at the use of cookies, and I admit it is a little retro sounding but they really add some flavor and thicken up the gravy without having to add cornstarch or flour. Plus I found an old German recipe (as opposed to just German-American) that calls for lebkuchen, a spicy cookie somewhat similar to American gingersnaps so I feel some what vindicated in my decision. It is also very “Baltimore” to serve sauerbraten with very large, fluffy potato dumplings. Many restaurants that serve the dish offer extra dumplings as a side along with sweet and sour cabbage.

Some notes:
I bought the traditional beef roast but cut it into large (roughly 2 inch wide) chunks/thick slices so the marinade would penetrate better and more quickly. In deference to the extremely hot weather we are having, I used the slow cooker but you could also follow the same instructions but use a dutch oven and roast it for about 4 hours at 350 or until thoroughly cooked and fork tender. While I only marinated the meat overnight (or more accurately, about 20 hours) you can marinate it up to 3 days if you would rather use the whole roast. Also, some people add juniper berries to their sour beef but I sort of think I am allergic to them so I left them out. I also don’t think they are entirely necessary, flavor-wise, at least not for the kind of sour beef we eat here in Charm City.

*I just can’t bring myself to pay $13 (or more!) per pound for meat that is going to cook for hours. When did cheap cuts of meat get so expensive? Doesn’t anyone make stew anymore?