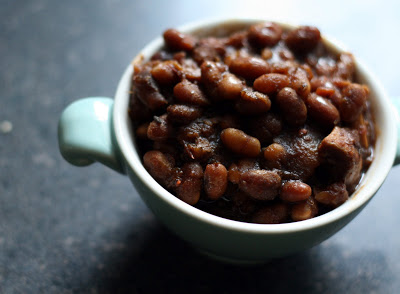 Directions:
The day before you want to serve: Place the beans in a pot and fill until the beans are under about 4 inches of water.

The next day: drain the beans and pour them into the slow cooker. Add the remaining ingredients. Cook on low 8-10 hours or until the beans are soft**. I’d check in on it around the 7 to 8 hour mark if possible. If the beans are looking a little dry and are not quite done, add a little water.

*I used the Original Mister Mustard Hot but any grainy, deli-style mustard would work.

**Or up to 12 hours, they just get softer and more intensely flavored the longer they cook.

I had never made baked beans before but I had heard that using the slow cooker was the way to go. I have to agree. The prep was extremely easy and by dinner time they were done. Added bonus: I didn’t have to heat up the house making a side dish on a steamy Summer day. They were also very forgiving, they ended up cooking for almost 12 hours and were still the perfect texture and flavor, which would make them perfect for cook outs or parties-you make them early in the day and then they are ready whenever you are.

I didn’t want to make the typical Boston or New England style baked beans so I went for a more Caribbean/tropical influenced version that went well with the rest of the meal. I ended up with beans that still had the texture and look of traditional baked beans but with a spicy, fruity edge. Having never made baked beans before, I was a little nervous but they turned out really well. I sort of approached them like I would pulled pork- lots of spices (but in small amounts because I knew the long cooking time would intensify the flavors) and just enough liquid to keep it from drying out. I don’t like super sweet baked beans so I used just a bit of molasses and came up with the idea of using a mango for some natural sweetness. The mango ended up being the perfect addition, it totally “melted” into the beans and added a slightly sweet, almost citrusy flavor that was hard to put your finger on. No one guessed the “secret ingredient” was mango! Despite my deep and abiding love for pork products, I relied on spices and fruit for flavor, not meat, so these beans are a perfect example of an “accidentally” vegan side dish. Even people who didn’t normally like baked beans liked these.