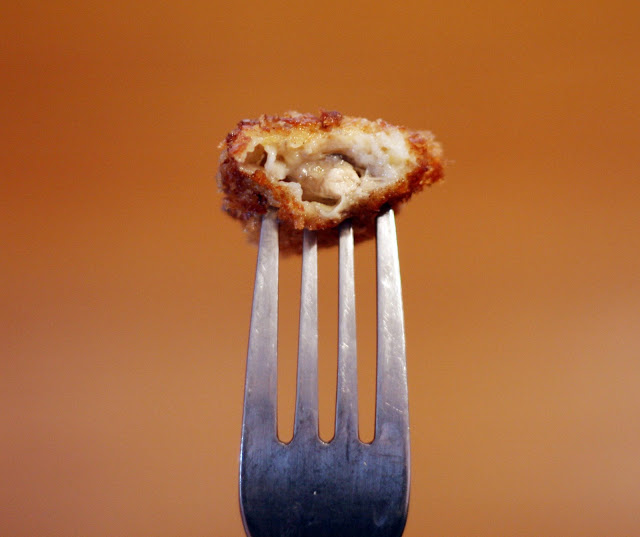 Directions:
Heat about 1/2 to 1 inch of oil in a large, shallow skillet, enough to cover the oysters. Meanwhile pour the egg, flour and breadcrumbs (or panko or cornmeal)into separate shallow bowls. Stir the the spices to the breadcrumbs or cornmeal or panko. Stir a few drops of hot sauce into the egg. Dredge each oyster in the flour, then in the egg then the bread crumbs (or cornmeal/panko). Drop the oysters into the hot oil, taking care that they do not overlap or they will stick together. Cook until golden on all sides, about 1 minute. They should float to the top when ready and not need to be flipped. Remove to a paper towel lined plate to drain. Serve hot with cocktail or tarter sauce or on a sandwich.

*I used Pillsbury Shake & Blend. Another similar product is Gold Medal Wondra Flour. It is found near regular flour or near gravy mixes. It is very fine and dissolves easily in water (or in this case, doesn’t make the oysters too thick with flour). Use all purpose if you have to.

Fried oysters are quite possibly my favorite food but I had never made them until Monday. Now I am wondering what took me so long! They were super quick to make (even when making them with three different coatings) and they came out really well. Better than when I have had them out actually. Not to mention much cheaper. In the past I stuck to the “only in months with R” rule but hey, these were on sale for only $8 lb so I couldn’t resist. There isn’t much oystering going in the the Bay* anymore so local oysters are hard to find even during peak months.

I put a call out to the Twitterverse asking about preferred ways of battering and about two-thirds of the respondents were in favor of cornmeal and the remaining responses were divided between traditional bread crumbs and panko. I decided to try them all to see which one I liked the most. 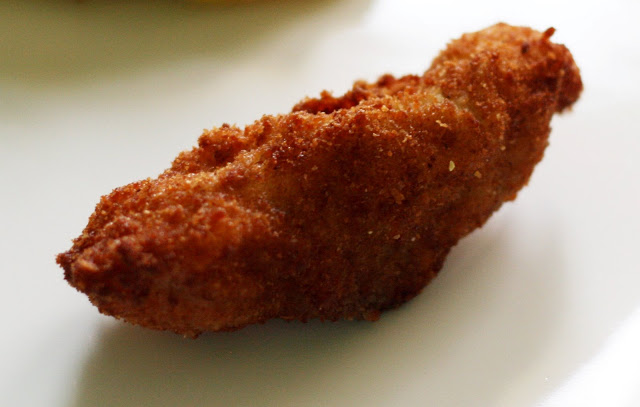 Breadcrumbs: Matt and my top choice. They browned evenly and had the perfect amount of breading. Lots of clear, fresh oyster flavor. The only drawback to the breadcrumbs is that when the oyster was was allowed to cool completely it was slightly less crispy than the other cornmeal or panko battered ones. I didn’t find this to be much a problem because no one wants to eat cold fried oysters anyway. They were all best fresh from the oil.

Panko: (pictured at the top of the post) The panko covered ones darkened more quickly than the other two but stayed crispy (even when cold) and allowed for a lot of oyster flavor to shine through. It dropped to second place because was difficult to coat the irregularly shaped oysters evenly with the panko. Some panko fell off during the frying. I didn’t have this problem when I’ve fried other seafood using the same technique so I think it is something to do with the dampness of the oysters and their shape. Skipping the initial flour step didn’t remedy the situation either. Panko might work better if you used very large, uniform oysters. 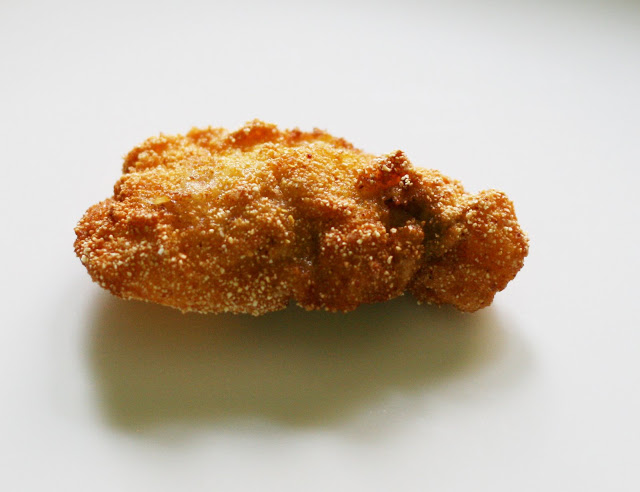 *If you are interested in learning more about Chesapeake Bay oystering and oyster pirates(!) here’s a great 1888 article from the NY Times archives.