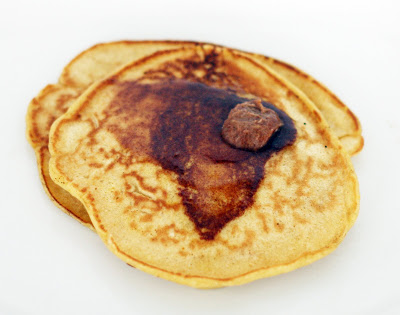 plus additional butter for griddle

Directions:
For the cinnamon butter: thoroughly combine all ingredients. Refrigerate until use.

Whisk together all pancake ingredients together in a large bowl until just mixed. Spoon 1/3 cup of batter on a hot, buttered griddle. Cook until the top is bubbling, then flip. Cook the pancakes until the underside is golden brown, then serve with cinnamon butter.

People are constantly asking me who I decide what I am going to make or what inspires my recipes. Truth be told, a lot of what I make is dictated by what is on sale at the supermarket or the sudden need to use up some ingredient or another. However, there are times when what I make is inspired by the world at large-novels, things I’ve had in restaurants, or even movies and television.

In this instance, I was watching an episode of Gilmore Girls and in it Luke, the diner owner, announces that the breakfast special is pumpkin pancakes with homemade cinnamon butter. Now if you have been reading the blog for a while now, you’ll know I am not a fan of pumpkin pie* and thus don’t make too many pumpkin recipes (just in case they end up tasting like pumpkin pie) but they sounded strangely good. I do like the flavor of actual pumpkin and thought the cinnamon butter would be enough to spice it up without having to add a bunch of spices to the actual pancake. Since I got the idea from a show that is decidedly not cooking oriented, I had to come up with an entirely new recipe. Luckily I got it right on the first try and ended up with moist but fluffy pancakes with a true pumpkin flavor. The not too sweet cinnamon butter was the perfect accompaniment.

*I think it is the combination of pumpkin pie spices + pumpkin that turns my stomach, ick.