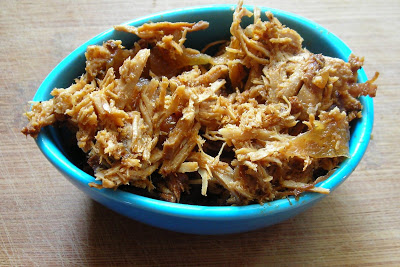 for the spice rub:

Directions:
Mix the spice rub ingredients together. Rub them on the pork. In a large skillet heat the oil and then brown the roast well on all sides. Place roast in slow cooker. Add all remaining ingredients to slow cooker. Cook on high in the slow cooker 6 hours**. When done, meat should shred easily with a fork. Remove roast from slow cooker. Shred with a fork (or use your fingers) and set aside. Mash any solid bits of the sauce with a potato masher. Return the pork to slow cooker, and toss to evenly coat with sauce. Serve on rolls.

*I used Mackay’s, it is found in the jam and jelly aisle or with international foods.

Is there such a thing as too many pulled pork recipes? I really hope not because I have posted a lot of them over the years. To date we have your basic pulled pork which was the first time I had ever made it then I branched out to East Meets Southeast Barbecue Pulled Pork which inspired me to create my absolute favorite pulled pork (and one of my favorite recipes ever) Smoky Mango Pulled Pork which lead to the fruity Blackberry Chipotle Pulled Pork then the Island Pineapple Pulled Pork and now this Caribbean inspired Calypso Pulled Pork. That’s a lot of pork. Beside my love of pork, one of the reasons I made so much pulled pork (although now that I think of it, five or six recipes spread out over 4 1/2 years out of about 800 recipes isn’t too much) is that it is one of the best things you can make in the slow cooker. Despite the slightly uninspiring picture here, it is effortless to make juicy, tender flavorful fall apart pork in the slow cooker. There is no need to add anything extra during the cooking time, it makes its own sauce and the pork can cook for hours only growing more tender. I actually like to use the slow cooker more during the hot steamy Summers Baltimore is famous for but it is great on a crisp fall day. Just plop everything in the pot, turn the knob and head out for day knowing you will be rewarded with succulent pork for dinner.