Directions:
NOTE: each filling recipe yield enough for all 12 knishes.

For the kasha filling:
Heat the oil in a skillet. Saute the onions and mushrooms until very brown. In small bowl, mix 1 egg into the kasha until the kasha is coated. It will look rather clumpy. Add to pan and stir until the groats start to separate from each other. Pour in the broth and bring to a boil. Reduce heat, cover and simmer for about 7-10 minutes. Allow to cool slightly. Mix with the mashed potatoes, pepper and egg. 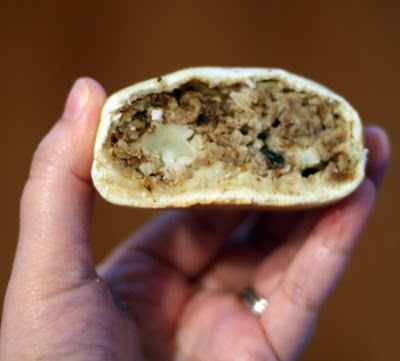 for the potato and onion filling:
Heat the schmaltz in a skillet. Add the onions and saute until very soft. Mash the onions into the potato along with some salt and pepper. 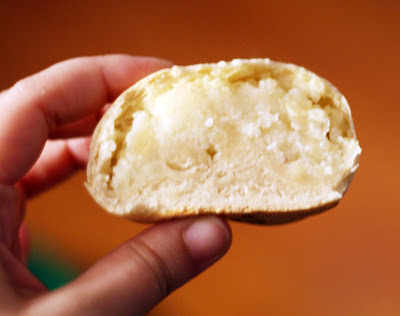 for the potato and smoked salmon filling:
Heat the schmaltz in a skillet. Add the onions and saute until very soft. Mash the onions into the potato along with the salmon and some salt and pepper. 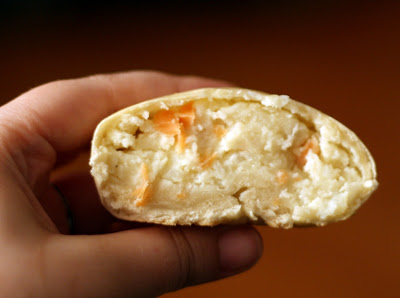 Preheat oven to 375. Allow your filling to cool while you make the dough. 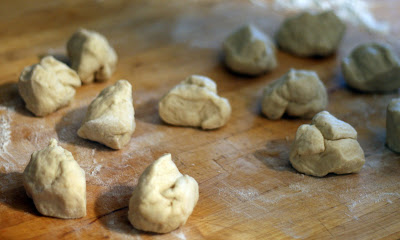 Divide the dough into 12 pieces. Roll each piece out on a floured surface to a 5 inch circle about 1/8 inch thick. Place a 1/4 cup of filling in the middle. Fold the sides up to close, pinch shut. Place seam-side down on a lined baking sheet. Prick the top with a fork, once. Beat the egg and water together for the egg wash. Brush over the top of the knish. Repeat for remaining dough. Bake for about 20 minutes or until very hot but not browned.

I’ve always wanted to make that deli staple, knishes at home. However, all of the recipes I came across called for oil. I hate working with oil based doughs, they invariably come out greasy and heavy tasting. Since we don’t keep kosher, keeping the dough pareve (that is to say neutral-neither dairy or meat) by using oil instead of butter is not an issue. So for my version I decided to make a dough that was more pierogi-like in origin. The dough is wonderfully soft and elastic to work with; not one rip or tear.

Now for the fillings! My favorite is potato and onion but Matt really like kasha (buckwheat groats) the best. So we made both. Then I remembered I had some truly divine smoked “European-style” salmon in the fridge from Just Cured and decided to make a potato-salmon one too. I am glad I did, it might be slightly nontraditional but it was really tasty. I’d also like to point out that it is very much worth your while to quickly render some chicken fat (using chicken thigh skins works well) in some onions to some schmaltz to use. It adds so much flavor and really gives it an authentic taste that you can’t quite get with butter or oil.

These are really the best knishes I’ve ever had. Smaller than the monstrosities one can find in delis they are lighter tasting while still being satisfying.