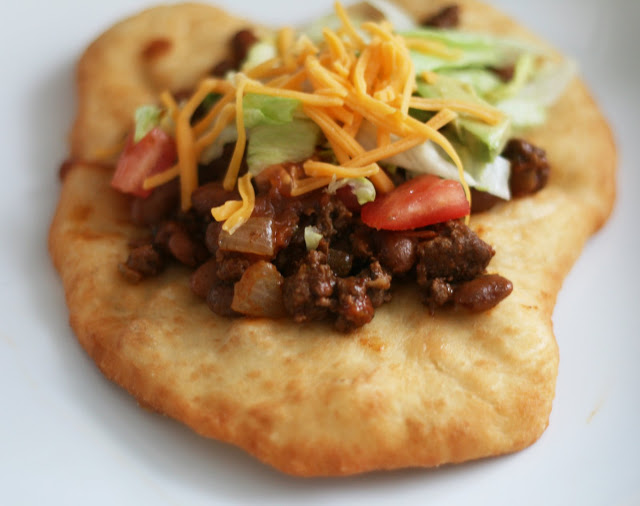 Directions:
for the fry bread:
Whisk the flour and yeast togehter in a large bowl. Place the sugar, salt, water and butter in a small sauce pan and heat until almost boiling. Allow to cool slightly. Pour over the flour and yeast and mix with a dough hook until a smooth, not too sticky ball of dough forms. If the dough is very sticky, slowly mix in additional flour. Cover and allow to rise 1 hour.

Meanwhile, prepare the meat. Saute the meat, onions and garlic in a large skillet until the onions just soften. Add the remaining ingredients. Stir. Cook until most of the liquid evaporates, stirring occasionally.

Heat about 2 inches of canola oil in a deep frying pan or skillet. Divide dough into about 15 pieces. On a clean, floured surface, roll dough into discs about 1/4 inch thick circles about 6 inches in diameter. Fry until golden brown on each side. Drain both sides on paper towel lined plates. If they puff up a lot during frying, press with a paper towel to deflate.

Place the meat on the center of the taco. Sprinkle with desired toppings. Fold in half to eat. 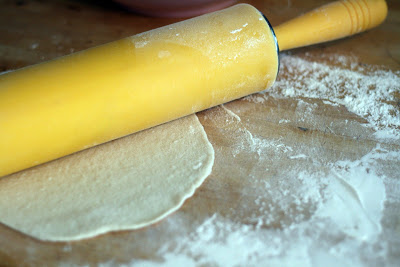 Indian tacos started out as a Najavo invention but quickly grew to become a popular contemporary powwow and festival treat served all over North America. Fry bread was named the official state bread of South Dakota back in 2005 and Indian tacos became the official state dish of Arizona in 1995. There is even a National Indian Taco Competition in Oklahoma. They are the perfect fair food: fried, spicy and portable. And they are surprisingly easy to make at home.

The fry bread comes together quickly and if cooked in hot oil and drained, much less greasy than you’d think. Some recipes call for baking soda instead of yeast but I find that a yeast dough yields a much more tender, tastier bread.

Often the beans in Indian tacos are served as a topping but adding them to the meat imbues them with flavor and eliminates the need to heat them separately. Bison is an extremely lean meat that works well with strong spices and isn’t as “heavy” as ground beef-perfect for use in a dish like Indian tacos.

Note: you can also bake the dough for the fry bread at 450 for a few minutes to make a tasty flatbread.