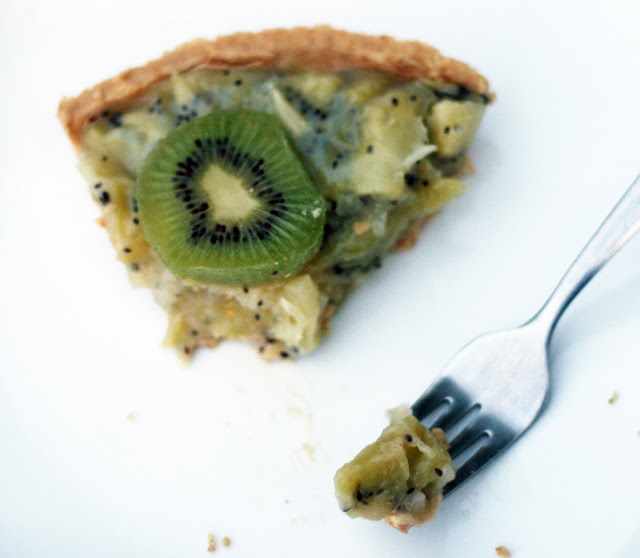 Directions:
Cut off the tops of the lemongrass and discard. Chop up the fragrant bottom half. Place the chunks into a cheesecloth pouch and tie shut. In a medium saucepan, bring 3cups of the kiwifruit, lemongrass, lime juice and zest and the sugar to a boil, stirring occasionally to dissolve the sugar and spread the lemongrass flavor throughout. Meanwhile, whisk together the cornstarch and water, set aside. After the mixture comes to a boil, remove the lemongrass pouch, stir in the cornstarch mixture and cook 2 additional minutes. Remove from heat and stir in the remaining cup of kiwi. Pour into the prepared pie shell. Top with additional sliced kiwi if desired. Cover and refrigerate for at least 6-8 hours or overnight before serving. 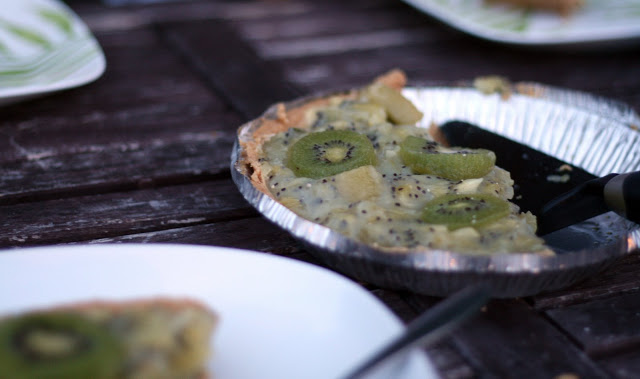 Note: I really wanted to make this with a mix of green and yellow kiwi but alas, yellow kiwi proved elusive. It would have been pretty!

Oh, I love icebox pies. I don’t make them nearly often enough. They require no baking so they are perfect for the hot steamy days that we have settled into. Since our house is of an icebox era vintage and thus has no air condition (though of course we don’t depend on the ice man to help us keep our perishables cool) any sort of baking during the summer months is done at your own peril.

Now, a lot of icebox pies (the most popular being key lime) are creamy and a few are frozen, but I have decided I like the ones that are basically just-held-together fruit the best. Now, kiwi is one of those fruits that reacts adversely to gelatin (it just won’t firm up) but it behaves just fine when introduced to a cornstarch slurry. In fact, the resulting pie is so sturdy and since it has to be refrigerated overnight, one could even pack a slice for lunch. Or have it for breakfast if so inclined. Why relegate it simply to dessert? It is 90% fruit after all! One kiwi has more than the recommended daily allowance of vitamin C. So that makes this pie practically health food, right?

So, keep your oven off! Let your pies set up in the fridge. Icebox pies are overdue for a comeback.