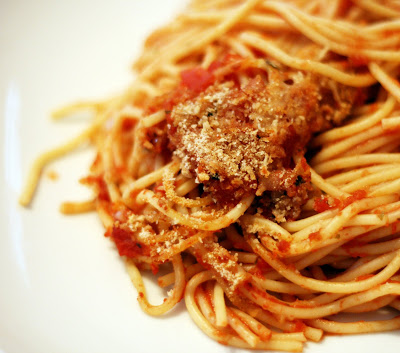 Directions:
Preheat oven to 350. If you’d like, break the spaghetti in half. Cook the spaghetti according to package instructions until just barely al dente. Drain and set aside. In a large skillet, heat the olive oil. Add the onions and carrots. Saute over low heat until the onions are translucent. Add the garlic and pimiento. Saute until fragrant. Add the tomatoes and herbs and cook, stirring occasionally, on low until it thickens-about 10 minutes. Stir in the spaghetti. Pour into a olive oiled casserole dish. Sprinkle with bread crumbs and Parmesan. Bake covered for 15 minutes then uncovered for an additional 10 or until piping hot.

Although I am no stranger to baked pasta dishes, baked spaghetti was never on my radar until I began noticing it being made on several British television shows. Not cooking shows, just regular dramas. Invariably, someone would be pulling out a casserole of baked spaghetti at some point during the series. I honestly don’t know if this is some sort of typical British dish (my research turned up nothing definitive) but after seeing it for the fifth or sixth time, it really started to look good. I am actually not a fan of spaghetti, preferring other pasta shapes, but when baked it takes on a different texture and sticks together in away that I enjoyed more than the usual worm-like slippery strands. Of course I have no way of knowing what went into those TV casseroles but I do know that this is one tasty pasta bake. The balsamic vinegar adds a fruitiness that complements the the touch of sweetness that the carrot and pimiento lend, which in turn melds with the herbs and tomato to create an complex tastying yet easy and totally comforting sauce. Perfect for those first chilly nights of fall.