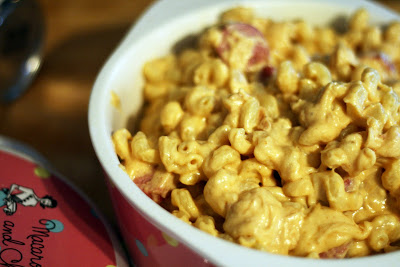 Directions:
For the béchamel: In a medium pan, melt the butter. Add the flour along with a sprinkle of salt and pepper, cayenne and stir until smooth. Add the milk and mustard and whisk until slightly thickened. Whisk in the cheeses until smooth. Stir in the hot dog slices. Pour over the drained pasta. Pour into lightly oiled baking dish. Top with a sprinkle of panko. Bake covered about 15 minutes, then uncover and cook until hot and bubbly, about 10-15 additional minutes.

* Most cans of evaporated milk only yield about 1 3/4 cups. Make up the rest with regular milk.

Note: Avoid using hot dogs with a very high fat content or your macaroni and cheese will become unappetizingly greasy as it bakes and the hot dogs release their juices.

Don’t tell anyone where you got this recipe! While it is super tasty, it is also rather embarrassing to admit that you not only made it but that were no children were present to use as an excuse. My mom had made mac and cheese with hot dogs (although not quite this version) when I was a kid a couple of times. I think she saw the suggestion in a magazine because it wasn’t exactly our usual fare. Anyway, I was telling my husband about the disappointing casserole book I had read and I revealed that I had eaten this somewhat dubious dish; the closest to a casserole I ever had growing up. He was intrigued (we do love hot dogs) so when I ended up with a couple flavorful but not too fatty Roseda Beef hot dogs leftover from an earlier meal, I knew what I had to make.

While the mac and cheese of my childhood was infrequent and consisted simply of macaroni tossed with shredded cheese and then baked, I’ve grown to enjoy a bit of creamy sauce. However, I avoid making it with the traditional heavy cream, that is a little too rich for me. Instead I use evaporated milk with is quite creamy tasting but is also 98% fat free. Regular (2%) milk works well as an alternative if you don’t have evaporated on hand. Since I was making macaroni cheese with hot dogs I went ahead and added some mustard to the sauce. It was a perfect choice, it added a bit of spice and extra sharpness to the cheddar.

I’ve been getting lot of emails about cheap eats and I am happy to say this was a very filling, very budget-friendly meal. While the locally produced hot dogs (bought at Graul’s for you locals) were on the pricy side ($8 for 6 hot dogs), the cheese was about $2, the evaporated milk was 80 cents and the pasta was only $1. The remaining ingredients were cheap staples. Add some broccoli ($1 lb) on the side and you have a complete, thrifty meal.