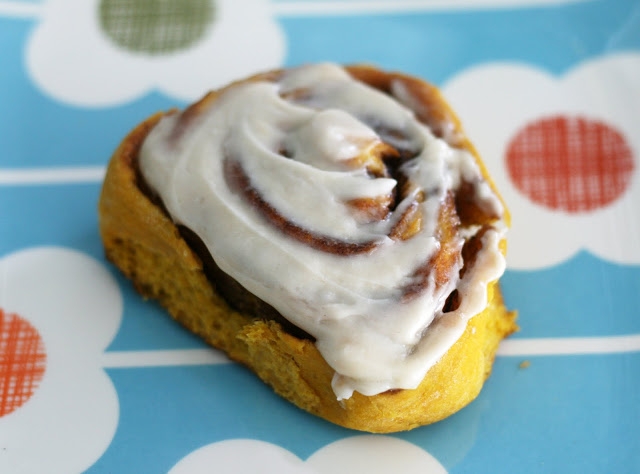 In a large mixing bowl, sprinkle the yeast on the water. Using an electric mixer with a dough hook combine the yeast, butter, sugar, egg and pumpkin. Add the flour and mix on low until smooth. The mixture should become a sticky dough at this time but it shouldn’t feel damp or look wet. If it does, mix in a small amount of flour. Knead on a floured surface or in a stand mixer until smooth (but still slightly sticky).

Place the ball of dough in a buttered bowl. Cover with a tea towel or loose plastic wrap and let rise for about 45 minutes or until it doubles in size. It is okay if it rises longer or higher than that.

Preheat oven to 350. Remove dough from bowl and place on a clean, floured surface. 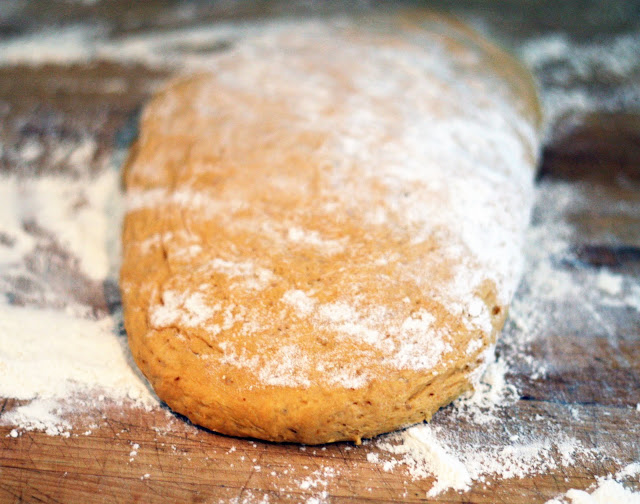 Roll the dough out in a large, 1/3 inch thick rectangle. 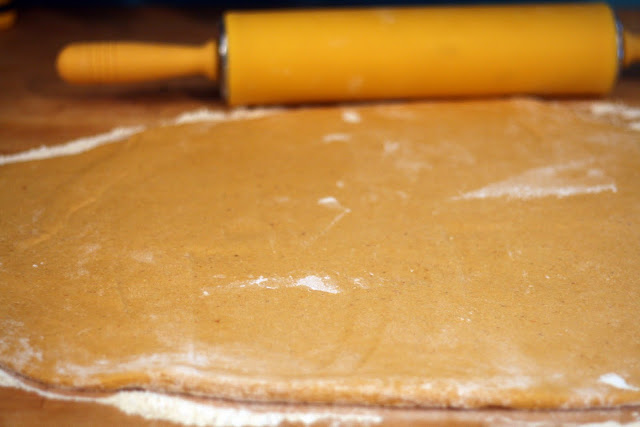 Spread the creamed butter over dough in a thin layer reaching all of the edges. 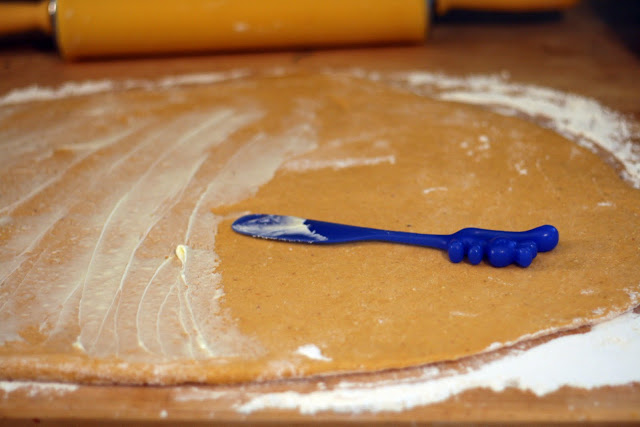 In small bowl, whisk together the brown sugar and 5 spice powder. Sprinkle evenly over the buttered dough. 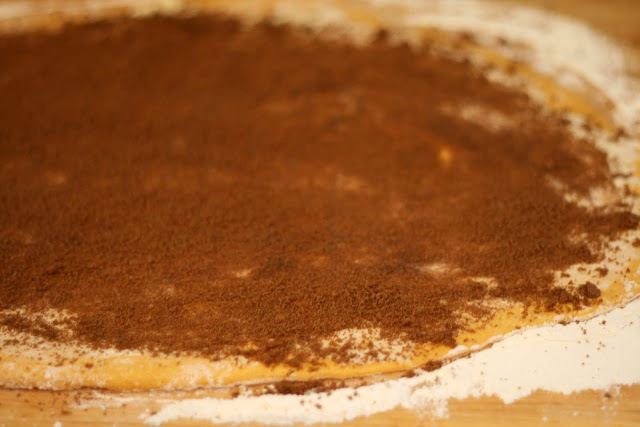 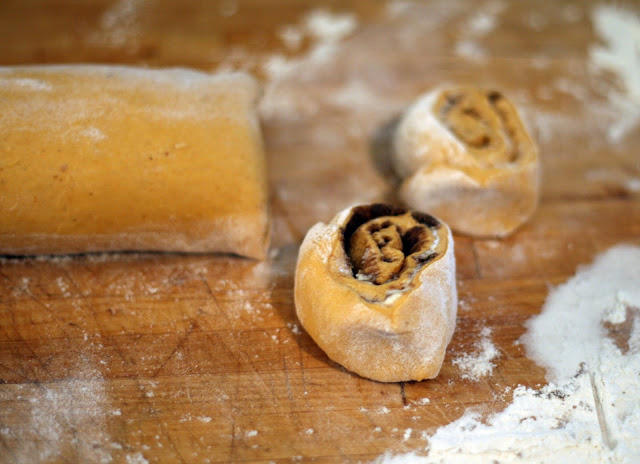 Discard the end slices if they are very small. Gently reshape each roll so they are round again. 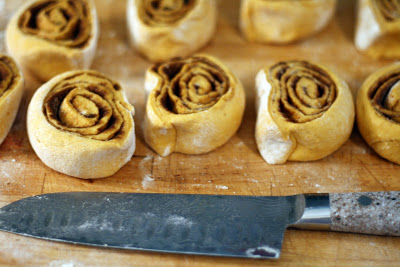 Place in three 9 inch round cake pans that have been lightly sprayed with nonstick baking spray, forming a circle with one roll in the middle. 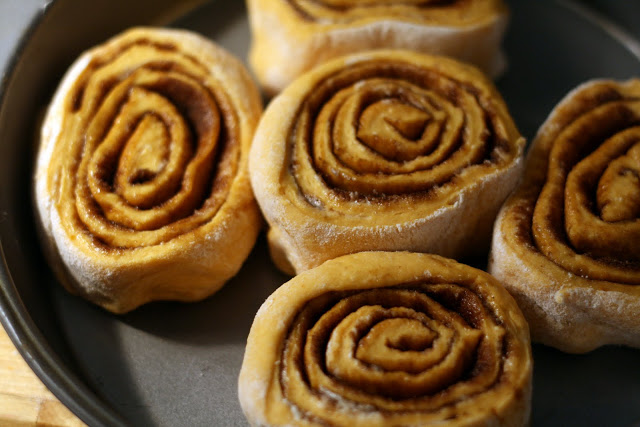 Allow to rise about 1/2 hour until they are about level to the top of the cake pan. 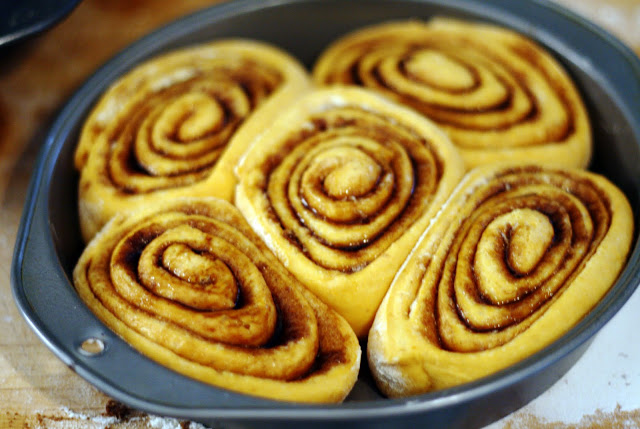 Bake for 15 minutes, then check to see if they are done. Pay careful attention to the creases where the rolls touch each other, you don’t want any pockets of raw dough! Return to oven to fully cook as needed. Remove to a wire rack to cool for a minute then invert and ice.

*I bought my bottle at H Mart (a Korean grocery store with lots of pan-Asian ingredients) but even McCormick makes a version now, so it is easily found at most grocery stores.

This recipe took sort of a circuitous route into existence. I try to only post seasonal recipes and this time of year my most popular and favorite recipes to make always involve pumpkin, so I wanted to come up with a new way of using pumpkin.

I had been thinking about making pumpkin 5 spice ice cream until I decided that the flavor (five spice powder is a mixture of cinnamon, star anise, cloves, ginger and Sichuan peppercorn) might be better suited to a twist on the traditional cinnamon roll.

I really liked the idea of the five spice-pumpkin ice cream but wasn’t confident that it would be good enough to post. I know that ice cream made with a ground spice often ends up with an unappetizing grainy texture so I had planned to break down the powder into the specific ingredients and use whole cloves, star anise, Sichuan peppercorn, cinnamon sticks and ginger and strain them out. However, I was worried that the flavor of so many whole spices might overpower the pumpkin. Five spice ice cream still sounds great (and I can’t wait to make it) but for this recipe I really wanted the pumpkin flavor to be present and distinct. So I decided against it but was still in love with the idea of the five spice-pumpkin combination; five spice is similar to the traditional pumpkin pie spices but a little fresher and more dynamic.

I think I couldn’t have come up with a better recipe incorporating five spice powder and pumpkin than these rolls. The fresh, pumpkin flavor is distinct but contained in the dough and is a great contrast to the distinctive flavor provided by the five spice powder in the sugar mixture. They are wonderfully addictive. We couldn’t even wait for the them to cool before we devoured several. Really, they are better than any cinnamon roll I’ve ever had.

The dough is very soft and easy to work with; it rolls out like a dream. And while, yes, this recipe isn’t exactly healthy, unlike a lot of sweet roll recipes, it only calls for 4 tablespoons of butter in the dough (unlike the 1/2 to 1 cup I’ve seen in cinnamon bun recipes) and I was able to get by with only 4 tablespoons in the filling. Not bad for a sweet roll that tastes so decadent.