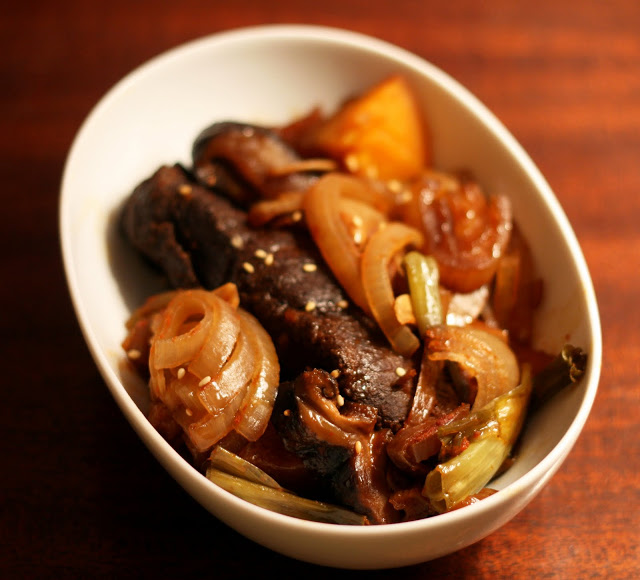 Directions:
In a small bowl, whisk together the sauce ingredients. Set aside. Bring a large pot of water to boil. Add the ribs and boil 10 minutes to render off the fat. Use tongs to fish out the meat. Place in a 4 quart oval slow cooker (I used this one). Top with the remaining ingredients. Pour the sauce over top. Cover and cook on low 8 hours or until the beef is falling apart tender.

Galbi jjim is a Korean sweet-soy braised short rib dish that is almost more of a stew than a straight up roast or braise. Traditionally, the ribs are bone-in but using boneless ribs makes for a less fatty finished product which is preferred when slow cooking. We used mirin for a touch of sweetness without having to use a lot of sugar (or as I’ve seen, I swear: soda) in the sauce. I also used butternut squash instead of the oft seen potato because it added natural sweetness and a bit of seasonal flair. It is one of my favorite, easy comfort food dishes.

The boiling step might seem unnecessary, but you would be amazed at how much fat gets removed in the process and how tender the meat is. Need proof of the fat rendering splendor? There will be a lot of fat in the leftover water and virtually none in the finished dish. Since there is little evaporation in slow cooker and meat is cooked for such a long time, it is important to use lean meats lest the meat becomes greasy and stringy. Believe me, I’ve done a ton of slow cooking. Lean meat is the way to go. I found that fattier cuts of meat can be successfully used in the slow cooker if they were sauteed (good for stews or chili) or boiled (ribs). Meat that has been slow cooked in a slow cooker becomes meltingly tender and just don’t need loads of fat to be flavorful.