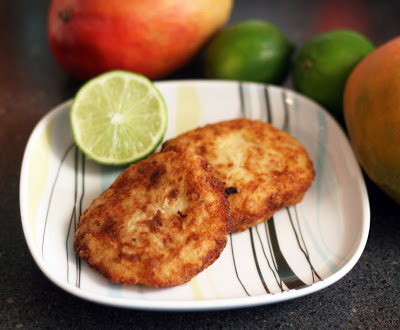 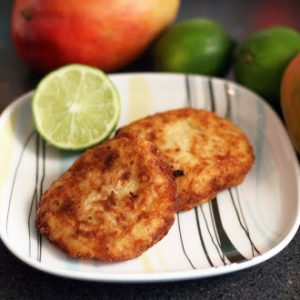 In Baltimore we have coddies which are little croquettes made with salt cod. You can still find them in some Baltimore institutions like Attman’s which sell them with their traditional mustard and saltine accoutrement. Salt cod used to be super cheap (it is a preserved fish after all and keeps forever) and when stretched with starches to make a cake it became an affordable snack/meal for workers. Now I am hard pressed to find salt cod that is affordable much less cheap and frankly, between the soaking and cake-making it is a lot of work to make such a humble food. Which is not to say that I will never post a coddie recipe (I’ve gotten requests!) but it probably won’t be anytime soon. Anyway, we like coddies and wondered if we could make some sort of cod cake with fresh cod which, oddly, is cheaper than salt cod. Since we weren’t making straight up coddies, we decided to look to the Caribbean (another place where they love their seafood) for inspiration. Using the spices and peppers we remember from our Caribbean honeymoon (five years ago, oy!) we created a new comfort food. They are larger than coddies so they are perfect to serve at a meal and even reheat well the next day.