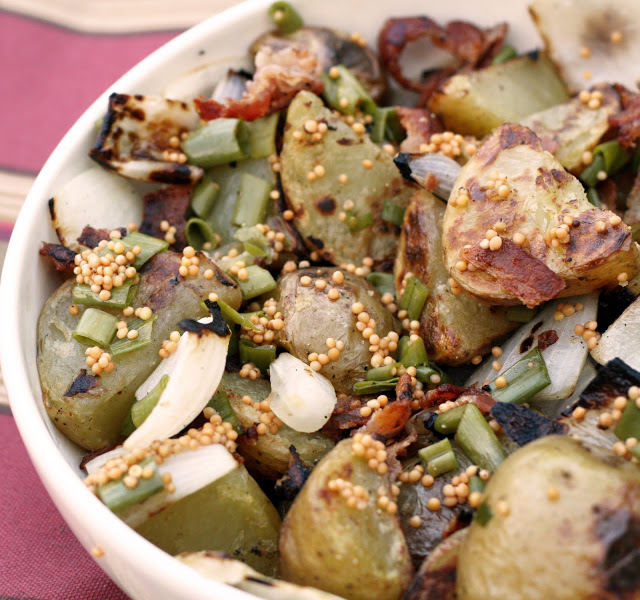 Directions:
Place the dressing in a jar or salad dressing container. Shake until well mixed. Set aside. Prep grill according to manufacturers’ directions. Oil a grilling pan with canola oil. Place the potatoes, onion wedges and bacon on the grilling pan. 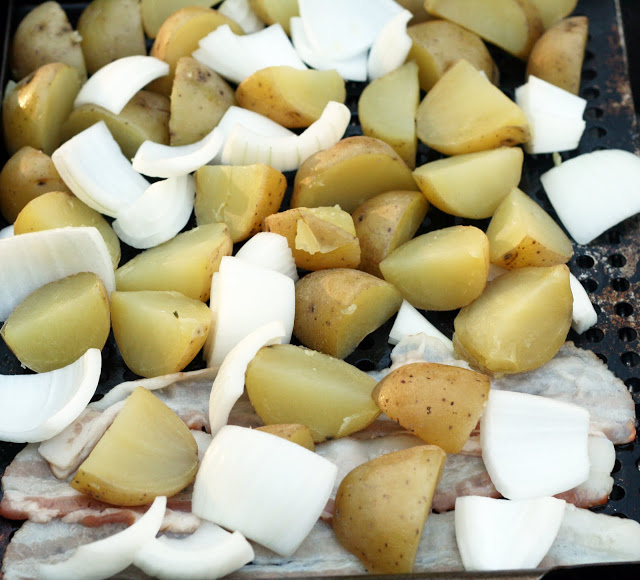 Cover and cook until the potatoes are fork-tender, turning occasionally. Place the potatoes and onion in a bowl. Crumble the bacon on top. Toss. Drizzle with dressing and toss again.

German potato salad is traditionally served hot and it is great, but when it is summer in Baltimore and you live in a 1930s house with no air conditioning, you really don’t want to be standing over the stove more than you have to. I had the idea to grill it instead and I really think I like it better. The smoky, grilled flavor of the potatoes and onions really ties in with the bacon and the potato gets sort of crisp around the edges. Yum! I hate it when potatoes in salads are mushy. I just make sure I boiled the potatoes until they were almost fork tender. You don’t want a potato falling apart on the grill! Using quartered potatoes (or small wedges) is important too, slices are difficult to turn. I used a grated grilling pan that only took up part of the grill so we were able to make our whole meal at once which was awesome. The grill pan really is needed for this recipe, the spaces in the grill rack are too large to cook bacon or thin slices of onion on. Luckily they aren’t terribly expensive and we use it all the time for vegetables and more delicate grillables.