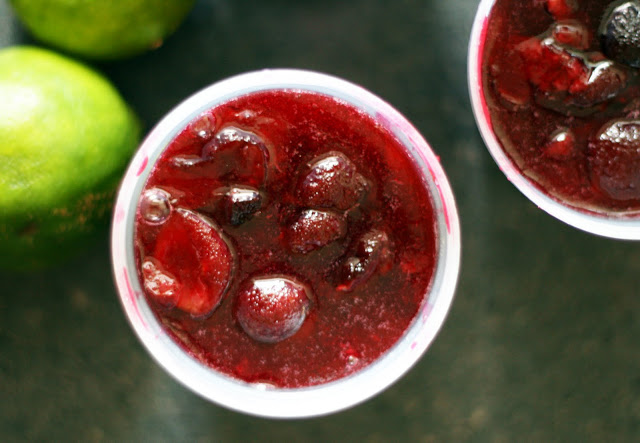 Directions:
Whisk together the sugar and pectin in a small bowl. In another bowl, mash the cherries with a potato masher. When well mashed, add the lime juice and zest. Stir. Sprinkle with the sugar/pectin mixture. Stir to combine. Pour into 4-5 8 oz jars. Ball makes some great plastic freezer jam jars I highly recommend. They have a fill line about 3/4 inch down. Don’t over fill. Use the jam within a month or freeze up to 1 year.

It has been a long time since I last made freezer jam. Too long. I like it because it is near instant gratification. No cooking, just mashing and then you have jam. Plus it uses a lot less sugar than traditionally canned jam because you don’t need the sugar to act as a preservative. It is just the beginning of cherry season here and I’ve been trying to make the most of it. Every year I wish I had a cherry pitter. Once the season rolls around it is too late to order one and have it arrive in time and when cherries aren’t in season, I think of other ways to spend my money. I’ve found that simply pulling the cherries in half with my hands is the more efficient (if slightly messy) route to pit-free cherries. For some reason I had been cutting them with a knife and it took forever. I’ve heard about methods involving a paper clip or toothpick but pulling them apart has been resulting in two perfect halves so I am loath to try something new. And it makes me feel super strong.

Anyway! We were talking about how we don’t have a Sonic (even though we get the commercials occasionally) anywhere with in several hours. I’ve never been to one but I have heard so many people going on about the cherry limeade, I feel like I have. So when I decided to make cherry jam, I thought to throw in some lime. I am glad I did. It is a delightful combination as it keeps the sweet cherries from being too sweet. Plus I think the natural pectin in the limes help it gel.