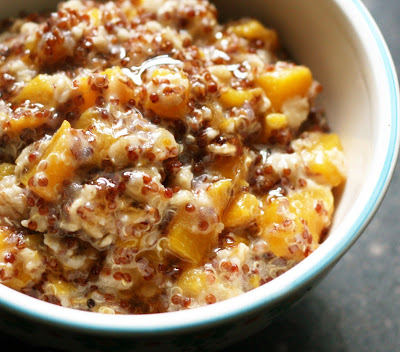 Directions:
Place the quinoa, peaches and water in a small saucepan. Cook for 30 minutes then add the oatmeal and milk. Cook until the oats are tender, about 10 minutes, stirring occasionally. Meanwhile, bring the sugar and tea to a boil in a very small pan. Boil until it reduces to a syrup (about 30 minutes). Stir the quinoa mixture. Drizzle with syrup.

Recently I was approached by Tazo to develop some new recipes using their tea. I received a big box of various teas to play around with and once a week for three weeks I will be sent a mystery ingredient to use in the recipe as well. Last week the ingredient was lavender and I made some yummy Oolong Cupcakes with Lavender Frosting. This week the ingredient is red quinoa. Might I admit something? I am not the biggest quinoa fan. I like the texture and the idea of quinoa but I don’t love the flavor. Maybe I got burned out on it last year when I was developing recipes for the cookbook but I was a little disappointed that it was the mystery ingredient. But I rallied and decided to pair it with a seasonal ingredient: peaches. Cooked together the quinoa took on a pleasant peachy flavor and the oatmeal made it creamy. When topped with the tasty cucumber white tea syrup, it became a fresh tasting breakfast that had the texture benefits of quinoa but the flavor wasn’t overpowering.