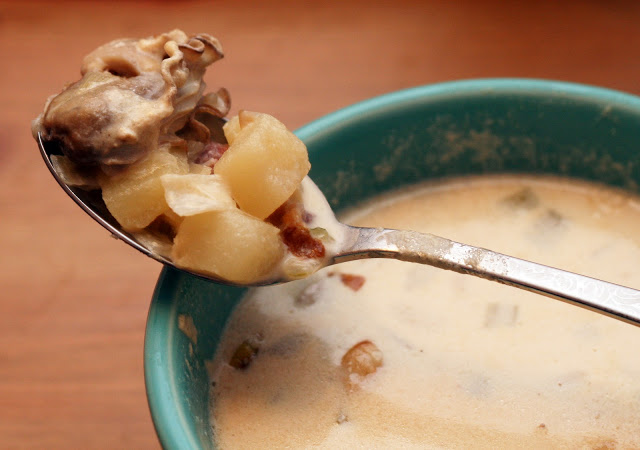 Directions:
Heat the butter or oil in a dutch oven or large pot. Saute the onion, pepper, potato, celery and ham until the vegetables are softened. Add the remaining ingredients and simmer until the oysters are cooked through.

This past weekend we went to the oyster festival in St. Michaels. One of the events was a oyster stew competition. For $5 you got a mug and could try 8 different stews then cast your vote. I honestly had never had oyster stew before but I liked it a lot. There was one that I loved but all of them were pretty similar. They were also pretty rich; lots of cream and butter. Which, to me, overpowered some of the oyster flavor. After the 6th or 7th sample, I even started to feel a little queasy. When I noticed that local oysters were under $7 a pound at our local Safeway, I figured I’d try to make an oyster stew that was both flavorful and not so heavy. To help accomplish that goal, I turned to one of my favorite ingredients: evaporated milk. I love it because, undiluted, it is super creamy and rich tasting but not heavy at all. In this case, I thinned it out with a bit of 2% milk and really liked the result. It didn’t taste “canned” (the biggest fear I find people have about using evaporated milk) and it really let the oyster’s flavor shine through. Some of the stews we tasted had bacon but I didn’t really like the texture it had in the stew and it seemed to make the stew kind of oily. I liked the idea of a smoky flavor so I added some lean ham from one of those spiral sliced hams that are so readily available right now. It did exactly what I wanted: smoky flavor with no extra fat.