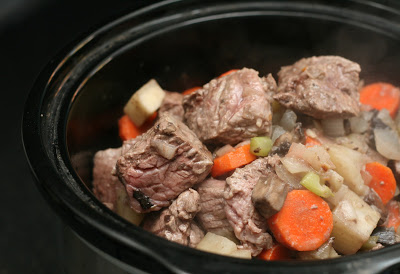 This recipe is inspired by a stew my grandpop made when I was growing up. I don’t think he ever even heard of a portobello mushroom but his stews always had a lot of vegetables. He would make them and use up whatever vegetables he had on hand and no two stews were the same. Some times they’d have tomatoes, some times green beans, some times corn. My favorites had green beans for some reason. He would cook it for hours on the stove top but when I was working on my cookbook last summer I realized how easy it was to make stew in the slow cooker. I don’t have to keep an eye on it like Grandpop did and the results are just as good. I know browning meat in the morning is the last thing I feel like doing but it does make for a richer final product. What I do is cut up all the vegetables the night before and put them in a ziplock or Tupperware. I try to buy pre-cubed meat if it looks good but if I don’t, I cube it and pack it in a separate container. That way in the morning all I have to do is shake the ingredients into the pan, brown them for a few minutes and then pop everything in the slow cooker.