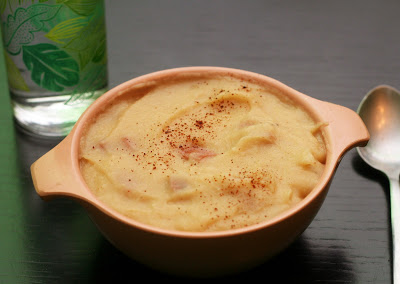 Directions:
In a large pot or dutch oven, heat the olive oil and butter. Saute the potato until just turning golden. Add the garlic, cauliflower, leeks. Saute a few minutes just until the leeks start to soften. Pour in the broth and spices. Simmer until the liquid has reduced a bit and the potatoes and cauliflower are soft and starting to fall apart. Meanwhile, lightly brown the ham on all sides in a dry, nonstick skillet. Using an immersion blender or work in batches using a regular blender, blend the soup until smooth. Stir in the ham. Heat for couple minutes.

*I used one of those boneless ham steaks that are always on sale. Leftover ham would be good too.

This is sort of a twist on the classic potato-leek soup. Cauliflower can be somewhat of a polarizing ingredient but in this soup, it is mild and adds body and creaminess. I don’t like soups that are entirely smooth so after blending it, I stirred in some ham that I had sauteed (to deepen the flavor) so there was some texture contrast. Of course, if you wanted to leave it out and use water instead of stock, it would make a wonderful vegan soup. At any rate, it is a great way to get your daily dose of vegetables on a cold winter’s night.