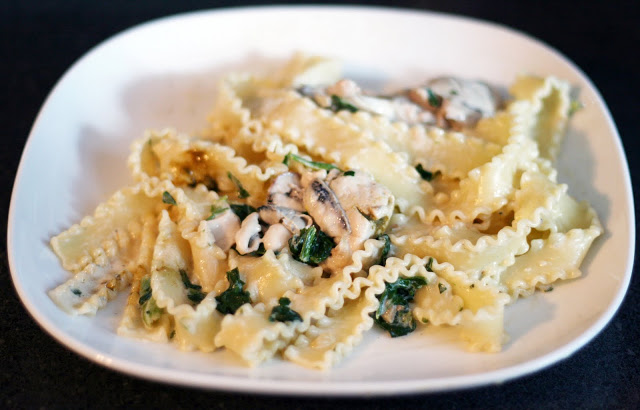 Directions:
Stir the lemon juice and the zest into the oysters. Set aside. Heat the olive oil in a large skillet. Sauté the garlic in the oil until fragrant. Add the cream, 1 tablespoon butter, salt, pepper and nutmeg. Bring to a boil and cook for just a minute or so, until the cream starts to thicken. Add the oysters and spinach to the pan and reduce the heat. Continue to cook just until the oysters are warmed through and look set. Remove from heat and stir in the Parmigiana Reggiano. Toss with the hot pasta and serve.

When we think about buying food in season fruits and vegetables are the first things that come to mind. However, there is another favorite food that many people consider to have a season: Chesapeake Bay oysters. Many people still follow the rule that states that oysters should only be consumed during months that contain the letter “R”.

The reasoning behind the rule was simple. Before modern refrigeration, it was risky to ship oysters any distance during the steamy Summer months. On very hot days, oysters often spoiled during transit. By restricting the season from Autumn to early Spring, diners were less likely to get food poisoning from improperly refrigerated oysters.

While oysters are now safe to eat and available for purchase all year, many people still stick to the traditional season. Because of this, fresh, local oysters are often easier to find during the colder months than they are the rest of the year. Luckily I was able to find these lovely examples and turn them in to a wonderful, creamy but not too heavy sauce.