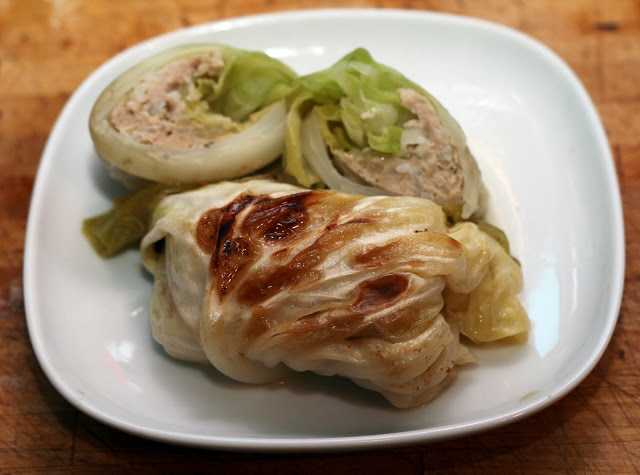 Bring rice and water to a boil in small pot. Cover and simmer until the water is absorbed. Add the milk and simmer, covered, until most of the milk is absorbed, about 20 minutes. It will look sort of like rice porridge/a loose pudding. Set aside and allow to cool slightly. Meanwhile, saute the onion until softened. Allow to cool slightly. Mix the egg (if needed), rice, meat and onion together thoroughly. Set aside.

Meanwhile bring a large pot of water to a boil. Add the cabbage. Cook until the leaves are softened. Remove the leaves. Cut off any very tough bits at the root end.

Place a small amount of filling towards the stem side of the center of each leaf. Fold the sides in over the filling and then roll away from you to close each bundle.*If the leaves are sufficiently soft, they will stay closed on their own.

Heat some butter in a skillet. Brown the cabbage rolls on each side.** Drizzle with syrup. Arrange in a wide dutch oven. Barely cover with stock. Simmer 20-30 minutes or until cooked through.

*My leaves were very big and I ended up with about 12 rolls. Keep the filling amount proportionate to the size of the leaves, take care not to over fill.

**I used a very large cast iron skillet so I could brown all of the rolls at once. If the pan is deep enough, you could also simmer the rolls in the pan you fried them in rather than a fresh dutch oven.

Today’s recipe is in honor of Kåldolmens dag, a day of celebrating Swedish heritage with cabbage rolls and coffee, Swedish national symbols of immigrant background. I came across a mention of this date while researching something else and knew I had to make these rolls!

I do love cabbage. I know it isn’t stylish but I am always happy to eat a bowl of buttered cabbage. So it stands to reason I also enjoy cabbage in other dishes as well. When it comes to stuffed cabbage I’ve made both the Polish kind with a tomato based sauce and the steamed Chinese style cabbage rolls but when I heard about Swedish stuffed cabbage, I know I had to make it. I had to cobble the recipe together about from anecdotal information but I think this is reasonably close to the real thing. I even had some Swedish syrup on hand thanks to my tendency towards ingredient hoarding but regular old golden syrup would work just as well. I have heard of making a quick white sauce to drizzle over the rolls made with either drippings, cabbage water or stock but honestly, I don’t think they needed it. They were moist, flavorful rolls and while it looks like a lot steps, I think it took me just over an hour after I started cooking to sit down and eat. The steps are simple and many can be completed at the same time (making the rice, cooking the onion, boiling the cabbage were all done simultaneously) and well all quite simple. Traditionally they served with boiled potatoes and lingonberry sauce but they would be good along side nearly anything.