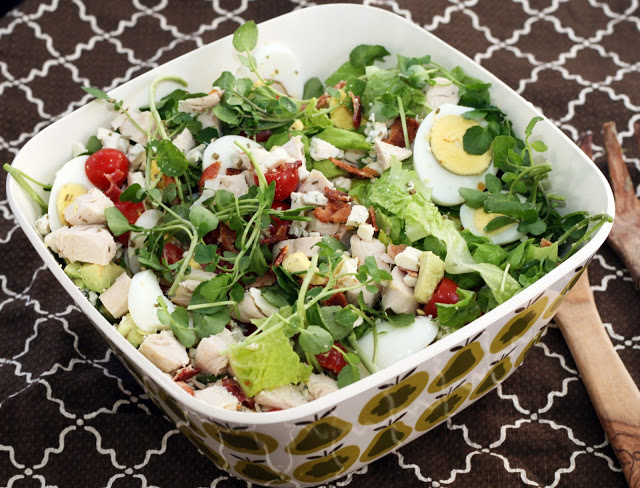 Directions:
Place all of the salad dressing ingredients in a dressing shaker or lidded jar. Shake until well combined. Refrigerate until ready to use.

Note: I made the bacon, boiled eggs and poached the chicken the night before I made the salad.

As we do every New Year’s Eve, my husband and I had our decade themed night. We started at the ’80s and have worked all way down to the ’30s. The Cobb Salad was invented at the Brown Derby in 1937** and was very popular with the people of Hollywood. I’ve tweaked the original a bit to reflect what is available now (I used cherry tomatoes instead of peeled regular tomatoes, left out the chicory) and modernized the dressing a bit. The spirit is the same, however! I found it to be a good salad for winter actually, because it didn’t require a lot of out-of-season ingredients and it was quite hardy.

*I poached it in water and vermouth with some pepper, garlic cloves and a few bay leaves.

**The story goes that Mr. Cobb, the owner of the Brown Derby made this salad late one night out of whatever odds and ends he found in the kitchen. His dining companion, Sid Grauman of Grauman’s Chinese Theatre fame, liked it so much he ordered it again and it was added to the menu.