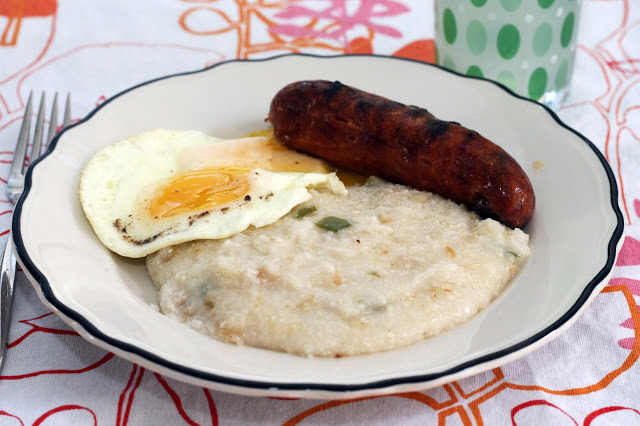 Directions:
In a skillet, saute the onion and jalapeño until the onion is soft. Remove from the skillet. Set aside. Broil the sausage until browned and cooked through. Set aside and keep warm. In a medium pot, bring the broth to a boil. Add the grits and stir continually for about 10 minutes or until all the broth is absorbed. Remove from the heat and stir in the cheese, salt, pepper and onion.

I was in the supermarket the other day and saw grits on the shelf and it looked oddly good. I don’t make a lot of grits but I do enjoy them and they have been on my mind lately when planning a trip to the South. We just don’t see them on the menu here as often. Shrimp and grits, yes, they are oddly popular but grits for breakfast? Not so much. Then I saw that my husband had put a package of andouille in the cart (it was on sale!) I thought I’d take it from its usual use and turn it into a breakfast sausage to serve with my grits. A lot of old time Baltimoreans will eat straight up breakfast (link) sausage and hominy for breakfast so why not grits and andouille? It is just their further south cousins. I added cheese (because I could) and peppers (to tie in with the spicy sausage) and a delicious breakfast was done in about 10 minutes* with little fuss. Perfect for the weekend or weekday and a step up from the usual.

*Also: can someone explain to the appeal of quick cooking grits? They only take 10 minutes the “long way”.