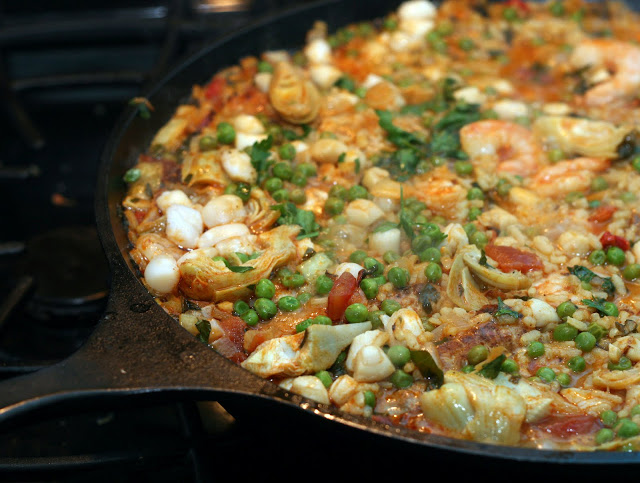 Directions:
Heat one cup of the stock and seep the saffron. Set aside. Heat the oil in a 14-inch cast iron skillet and saute the garlic, onion and chorizo until the onion is translucent. Add the tomatoes and peppers and cook until most of the liquid has evaporated. Meanwhile, sprinkle the catfish with a small amount of  the smoked paprika and cook, until nearly but not quite through, in a nonstick pan. Remove the fish from heat. Add the rice to the tomato-chorizo mixture and cook 1 minute, stirring constantly. Add the stock,  the saffron stock, remaining paprika, salt and pepper. Simmer for 10 minutes without stirring. After 10 minutes the rice should start to rise to the top and puff up. Add the artichoke hearts, catfish, shrimp and scallops. Cover. Cook about 10 more minutes or until there is nearly no liquid left in the pan. Add the peas and parsley. Cook 1-2 minutes or until the peas are bright green and cooked. A slight crackling sound means a thin layer of crispy rice is forming, it is the socarrat and this is a good thing! Remove the rice before it burns or worse, if it starts to look like it is heading towards becoming mushy. Serve.

Whenever I think of paella, I am reminded of the Hamish Macbeth episode when the McLopez clan is in jail and keep asking for “pie-yella” to be served in keeping with their Spanish-Scottish heritage. Thankfully, I also think of a tasty rice dish, one that hopefully includes socarrat, the crispy bottom layer of the pan. Despite having nearly every kind of small kitchen appliance and pan know to man and womankind, I do not have an official paella pan. This is due in no small part to the fact that I until I made this, had never actually made paella before. But we had two other couples coming to dinner and I thought I’d give it a shot. Luckily, a cast iron skillet is more than up to the task. It is a bit of a task to track down all of the ingredients. Our local Italian store sells Spanish chorizo so that was easy but finding the official Bomba rice was trickier. Luckily, I found it at one of the two Wegmans that are roughly in our area. Saffron was ordered online. I made the shrimp stock the week before and froze it. Now I did take a short cut and used high quality jarred roasted peppers. Feel free to make your own but it seemed like the quickest thing to cut with the littlest effect on the final product. The end result is a relatively easy yet very, very impressive looking dish to serve guests. Try serving tapas-style snacks before hand but don’t let anyone fill up! No one wants to miss out on this very most Spanish of dishes.

I’m part of a small group of bloggers who are posting regional dishes as part of Bravo’s “Around the World in 80 Plates”. The show features chefs from all over the US racing through cities across the country and taking over restaurants to serve their version of the native cuisine. This week’s show takes place in Barcelona, Spain. Tune in on May 23th, 10/9c. Check out their Facebook page and see pictures of what other bloggers are up to and to learn more about the show.