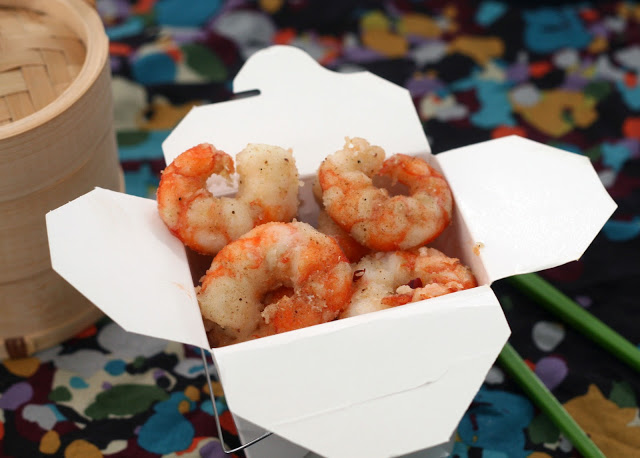 In a dry pan, heat the salt and pepper mixture, stirring continuously to avoid burning, for 3-5 minutes or until heated through and very fragrant. Pour into a plate to cool completely. Set aside.

Meanwhile, add 1 tablespoon of the kosher salt to a small bowl of cold water. Stir to dissolve. Add the shrimp and wash the shrimp. Drain then repeat with remaining salt. Rinse the shrimp in cold water then pat dry. Set aside.

Stir together the cornstarch, flour and 1-2 tablespoon(s) of the salt and pepper mix in a shallow bowl. Dredge the shrimp.

Heat about 1 inch of canola oil in a large wok or skillet. Add the shrimp and fry, 2-3 minutes or until fully cooked. Drain on a paper towel lined plate. Plate and garnish with the minced chile. Sprinkle with additional salt mixture, if desired.

If there is one thing that is popular in Hong Kong is food. You can find dishes from nearly very providence in China as well as Japanese, British, Indian and American-influenced dishes.  Since Bravo’s “Around the World in 80 Plates will be in Hong Kong this week (June 27th, 10/9c)I thought it would be a fun chance to make one of my favorite Cantonese dishes, which is easy to find in Hong Kong, lightly coated, crisp salt and pepper shrimp. It is traditionally found at dinnertime (steamed dishes like dumplings are the ones found earlier in the day, during yum cha) at one of the many dim sum restaurants.

I modified the dish a bit from being absolutely traditional to make it more “user friendly”;  I peeled the shrimp instead of leaving the shells on and used cornstarch instead of harder-to-find rice flour but the end result is wonderful. Spicy and salty and crunchy. They are super fun to make in a wok but if your wok frying skills aren’t the best, you can fry the whole batch at once in a large heavy bottomed skillet.

Sichuan peppercorns are know for their “numbing hot” tendencies, they make your tongue and lips tingle a bit while providing their signature citrus-y flavor. Store the leftover salt/pepper mixture in an airtight container for the next time you make salt and pepper shrimp (or try it on popcorn!).