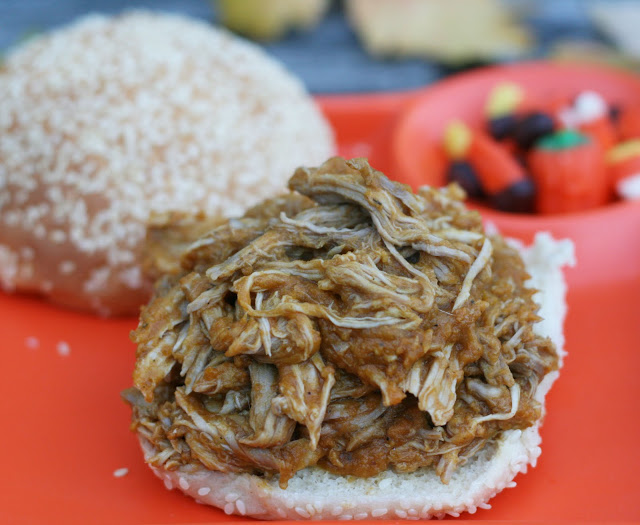 Directions:
Place all ingredients (EXCEPT THE PORK!) into a blender and pulse until smooth. Pour over the pork in a marinating container or resealable bag. Refrigerate overnight. The next morning, pour everything into a four or two quart slow cooker. Cook on low 8-10 hours. Shred the pork with two forks in the slow cooker. Toss to evenly distribute the sauce. Serve on rolls.

I had some pumpkin leftover from making cookies and I was worried it would go bad before I had a chance to use it but then I had the idea to add it to the pulled pork I planned on making. I wasn’t sure how it would turn out, I’ve made a lot of pulled pork before but never with pumpkin. But it sounded tasty (and seasonal) so I thought it was worth the risk. I went sort of Jamaican inspired with the rest of the seasonings because I didn’t want the pork to be sweet, which I think a lot of pumpkin recipes end up being. Which is a shame because pumpkin is wonderful when given the savory treatment. I ended up loving the combination. It had a small kick to it but mostly the seasonings brought out the earthiness of the pumpkin. I liked the technique I used for this recipe too, pureeing the sauce the night before means little to no chopping required, zero work in the morning and the flavor really penetrated the pork. Win-win.

My husband not only ate seconds of the pork, he made immediate plans to bring leftovers to work with him today. If that isn’t an endorsement  I don’t know what is!