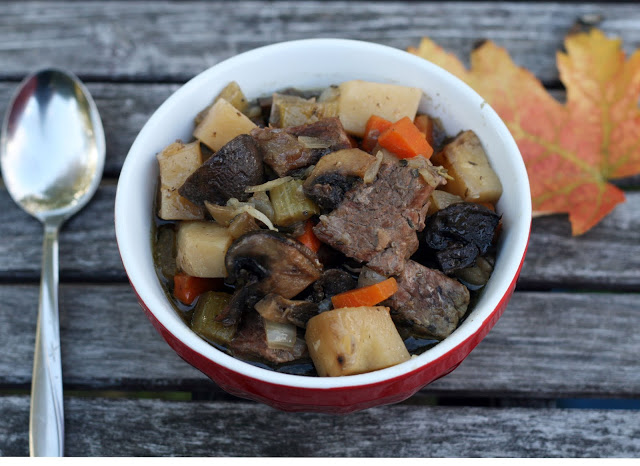 Directions:
Toss the beef with the salt, pepper and some super fine flour to coat. Set aside. Heat some olive oil in a Dutch oven and add the beef, carrots, potatoes, mushrooms and herbs. Saute until the beef is lightly browned on all sides and the vegetables are just beginning to soften. Pour the mixture into a 6 quart slow cooker. Add the stock and bay leaf. Cover and cook for 8 hours. Remove the bay leaf prior to serving. Stir.

Growing up my grandpop always made beef stew. The ingredients always varied because I think he was trying to use up odds and ends and but it was always tasty! He was his hardest critic though because every time he made it he’d say it was better some time before and then tweak it again. I’m sort of the same way, I guess. Stews I’ve made in the past have always been quite tasty so I’m not trying to improve on them as much as I like to make something new each time. I like variety and honestly, developing and posting recipes for Coconut & Lime (over 1,450 to date) can be a daunting and somewhat grueling task. If I kept making the same thing over and over again, I’d never have anything post!

For this beef stew I took a page from Grandpop and used what we had in the house for the most part. I had rosemary and thyme leftover from other recipes, I always have potatoes, carrots, garlic and celery and I had an enormous box of mushrooms I bought at Costco that had to be used. So I added lots of mushrooms and only had to pick up the beef to round it out. I was careful to cut everything roughly the same size as the beef so it cooked evenly. I was a little worried the rosemary might overwhelm as it is wont to do but it mellowed during cooking and gave a pleasant herbal note to the hearty, rich stew.