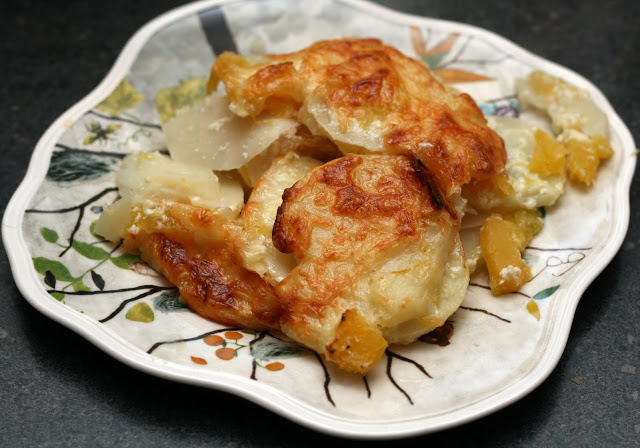 Preheat oven to 400. Grease or spray with cooking spray a 2 quart baking dish. Whisk together the milk and sour cream. Bring milk mixture, spices and garlic to a simmer in a large, high-walled skillet (I used a 14-inch cast iron skillet). Add potatoes, onion  and squash continue to simmer, stirring occasionally, until potatoes and squash are fork tender, about 20 minutes. Remove half of the squash, potato and onion and arrange in the baking dish (I used my spider to remove the vegetables but a slotted spoon would do). Sprinkle with half of the cheese. Top with remaining potatoes, onion and squash. Add about 1 cup of the milk mixture to the baking dish (you should be able to see it but the vegetables should not be fully submerged). Sprinkle with the remaining cheese and bake 30-40 minutes or until hot and bubbly. All to sit 5-10 minutes prior to serving.

Note: You could (carefully!) use a mandoline to slice the potatoes and squash if you want. I just used a really sharp knife and aimed for slices between 1/8 and 1/4 inch thick. I floated the slices in a bowl full of water until I was ready to add them to the milk mixture.

This is a lightened up, squash-added twist on the classic French casserole potatoes Dauphinoise. November is the time for potato casseroles if there ever was one and I love cheesy potatoes but never, ever make them because they are time consuming and heavy and after all that, I still have to make a vegetable. Not my bag. So this year I was thinking of how I can make my cheesy dreams come true with minimal effort + maximum results. Adding winter squash was a no brainer because it can roughly be treated the same as potatoes (both dense, kind of starchy, similar cooking times) and it would eliminate my need to for separate vegetable*. I turned to the French for the technique and spirit but I used decidedly non-French extra, extra sharp cheddar as the cheese because I love it so. I think a good Gruyère would work really well too. You need an assertive cheese or the whole thing comes out sort of bland and sad.  Normally these sort of dishes are made with heavy cream which I never have on hand except when making ice cream so I subbed in my usual milk and sour cream and loved the results. Not as over-the-top rich but still creamy and with a sublte tang. The onions were my idea too, I love onions with potatoes and the boiling makes them mild and tender, perfect for this sort of comfort food. The simmering in milk step seems fussy but it ensures perfectly cooked, tender potato and squash. Plus when you add some of the liquid back in the baking dish, it is already infused with flavor.

*I just made this on a random Thursday night but I think they would be so awesome served on Thanksgiving. You can even bake them ahead of time and just reheat them right before dinner.