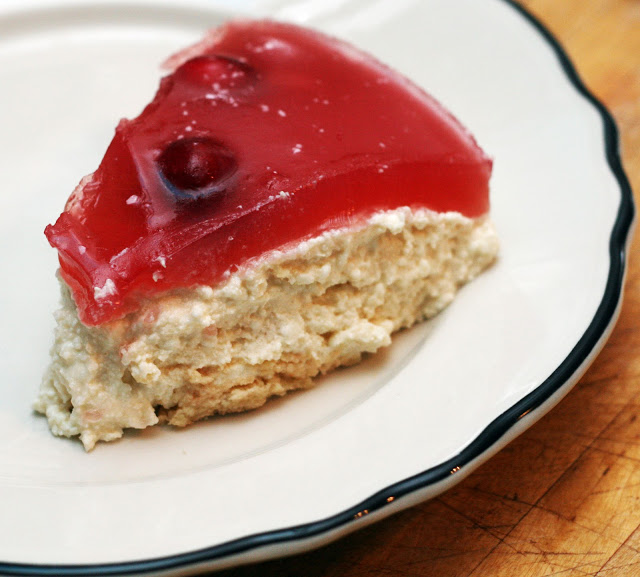 Directions:
Line the bottom of a 9 inch spring form pan with the cookies. Set aside. 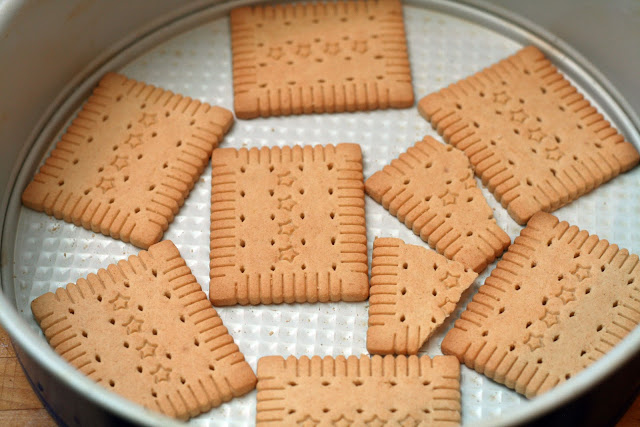 for the cheesecake:
Whisk 1 tablespoon gelatin in 1/3 cup of water and let it sit until softened, about 10 minutes. In a large bowl, mix together the cheese, vanilla and sugar until well blended. Beat in the egg yolks, then the bloomed gelatin until well mixed. The mixture should look light and creamy Scrape into the lined pan and smooth the top with the back of a spoon. Refrigerate the cheesecake 1-2 hours or until fairly firm.

for the gelatin layer:
If you’d like, arrange fruit on the top of the cheesecake. Set aside. Soak the gelatin in the cold water in a large bowl until softened. Meanwhile, bring the cranberry juice to a boil. Pour the boiling juice over the gelatin. Stir in the sugar and lemon juice. Allow to cool for about 25 minutes then pour some over the fruit. Refrigerate until mostly set, about 30 minutes, then pour the remaining cranberry gelatin over the cheesecake, poking down any floating berries, and refrigerate until fully set, about 2 hours.

Carefully open the spring form pan and slice to serve. Store any leftovers in the refrigerator.

*Look for this soft, curd-y cheese in Eastern European markets. You could try substituting farmers cheese.

This recipe was a bit of an adventure. I came across a picture of this cheesecake on a Polish cooking website and immediately wanted to make it. The trouble was I don’t speak or read Polish and I couldn’t find a recipe in English that seemed evenly vaguely authentic. The few I did find were either for the non-gelatin topped version (sernik) or ones that called for regular old American cream cheese which even I could glean was entirely the wrong kind of texture.

Luckily, using a Polish to English dictionary, watching You Tube videos of Polish cooking shows so I knew what each step looked like and venturing down to the Polish market, I felt like I had a pretty good idea of how to make it.

I was able to procure the correct type of cheese (twarog, which is a lot like the farmers cheese I’ve seen at farmers markets) some plain cookies (oddly these “digestive biscuits” were difficult to find in the regular grocery store. I ended up having to use rectangular cookies but if you can find round ones like the one this woman uses in this video I found, they would work wonderfully) to line the bottom of the pan. You can skip the cookies all together, some recipes called for it and some didn’t but I liked the idea and it was easy since you don’t make a true crust.

On to the rest of the recipe. I made a simple no bake cheesecake filling with gelatin added for stability and popped it in the fridge to set up. I wanted to make cranberry flavored gelatin (aka jelly aka Jell-O) since I was serving this for Thanksgiving and was honestly just going to buy a box and be done with it (I did not see a single Polish recipe that did not use a pre-fab mix packet) but apparently grocery stores do not sell cranberry flavored Jell-O in October so I picked up a bottle of 100% (unsweetened) cranberry juice and made my own. If you can find cranberry Jell-O or want to make a different flavor, you could just use the box. I won’t tell. Just take care to use a little less water so the Jell-O is firmer than normal. I had a vision though so I had to make my own and honestly, it isn’t any more difficult than making the mix, just a little more expensive because you have to buy the juice and plain gelatin and not just a 80¢ box. So I made the cranberry gelatin then popped that in the fridge to fully set before serving. If you are making your own, I proportioned the recipe so you only need one 4-packet box of unflavored (aka Knox) gelatin: 1 for the cheesecake, 3 for the gelatin layer. Depending on how tall your pan is, you may end up with excess cranberry gelatin. Either pour it into a bowl or mold and allow to set in the refrigerator for an extra treat or discard. All of this sounds terribly complicated but honestly, it is an incredibly simple recipe to make and requires no cooking.

It was worth all of the research to have a slice of creamy cheese cake topped with tart cranberries!