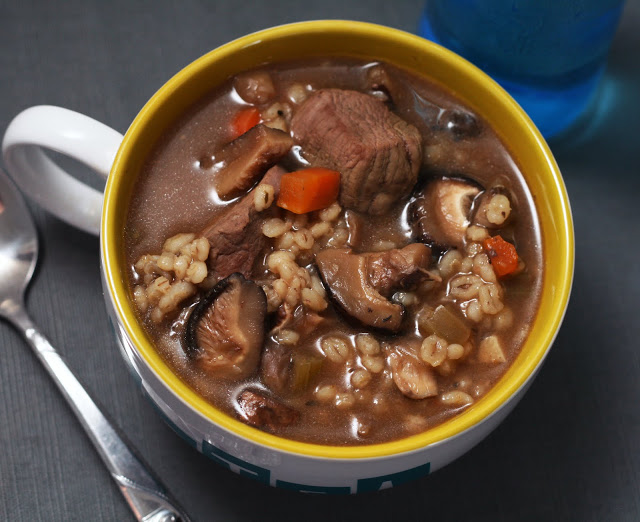 Directions:
In a large nonstick skillet, brown the cubes of beef for 1-2 minutes. Add the remaining fresh ingredients and saute until the beef is lightly browned on all sides but not fully cooked. Meanwhile, soak the dried shiitake mushrooms in boiling water for as long as it takes to brown the meat. Use a slotted spoon to scoop the meat and vegetable mixture into a 6-quart slow cooker. Drain the dried mushrooms. Add the mushrooms to the slow cooker and discard the mushroom liquid. Add the spices, barley and stock. Stir. Cook on low for 8-10 hrs. Add additional stock to thin out the soup if desired.

We’d found the trick to really good mushroom barley soup is using a mixture of different types of fresh mushrooms and this is the key: at least one variety of dried mushrooms. The dried mushrooms really give it a woodsy depth of flavor that is wonderful in mushroom barley soup. The market had fresh oyster and shiitake mushrooms and we had fresh crimini and dried shiitake at home so we went with that. My previous versions of mushroom barley soup were made on the stove top, and this one could as well but it takes a couple of hours for it to cook on the stove and we were waiting for a delivery and didn’t want to be distracted from the stove and end up with no dinner. So a slow cooker recipe it would be! Matt chopped up the vegetables the night before (at like 2 am, I was very tired browning that meat early in the morning) so they were ready to go. Browning the beef gives it a more appetizing color in the finished soup and I think a better flavor. Dumping the vegetables on top and cooking them a bit isn’t quite as necessary but allows all of those mushrooms to release a bit of the water that otherwise would have diluted your soup. Anything for extra concentrated flavor in the ultimate soup!