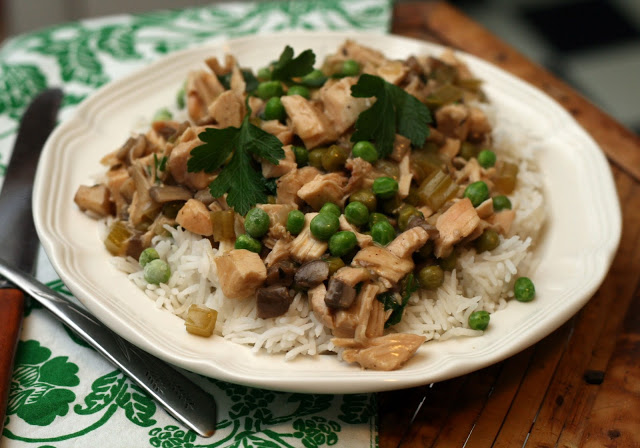 Directions:
Melt the butter in a medium sauce pan. Saute onions, celery, pepper and mushrooms in the butter until the mushrooms are softened and the onion is translucent. Add the flour and spices, stir to coat. Add the sherry and bring to a boil, stirring occasionally. Add the chicken, peas, stock and cream and simmer until thickened. Stir in parsley. Serve immediately over toast, rice or egg noodles.

Chicken a la king is one of those recipes I don’t think has really been fashionable since it was invented in the 1890s. Which is a bit of a shame because it really is tasty! I don’t think I’ve ever seen it on a menu before and honestly, until I made this the other day, I think my only real exposure to it was a boil-in-the-bag meal when I was about 8. I hadn’t thought of it in years until I came across a mention of it when I was planning our 1920s menus. I mentally filed it away for later. Matt’s been home recovering from ACL surgery and this recipe was perfect for that. Easy to eat out of a bowl (since he can’t eat at the table yet), could be made using store-bought rotisserie chicken (less work for me!) and quick to come together. It is rich tasting but this version isn’t too heavy; there is just enough cream to thicken the sauce but the bulk of the liquid is much lighter chicken stock. I also added some vegetables which weren’t strictly traditional but made it so the dish was more of a complete meal to itself to avoid making unnecessary side dishes.