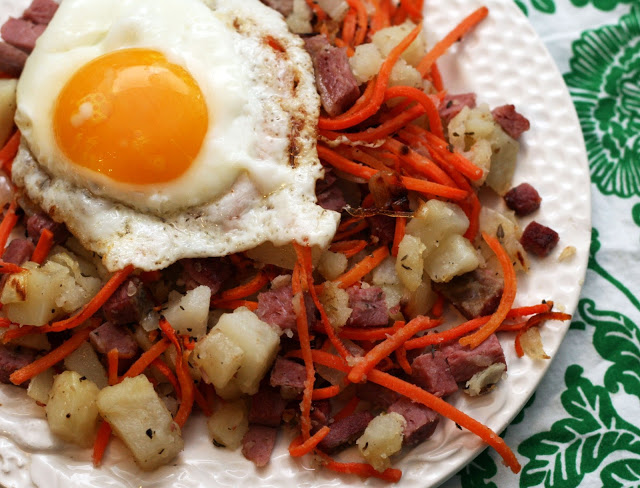 Directions:
Heat the butter and oil in a large skillet. Saute the onion, potatoes and carrots until the onion is translucent. Add the corned beef and spices. Saute until the corned beef is heated through. Plate and top with fried egg(s).

When we were in Maine last year we had some truly delish corned beef hash at Hot Suppa in Portland. We didn’t know corned beef hash could be so good. Or that it was such a popular dish in Maine. I’ve been itching to make my own version but didn’t get to it until recently. Hot Suppa’s hash had carrots in it which I’m not entirely sure is authentic, but we enjoyed it so I tossed them in this version as well. I also got the impression that their hash was sauteed and then made into large, rough patties since it held its shape more than the average hash and had a bit of a crust to it. You could do this (I think you’d have to refrigerate the mixture for a bit to make it “stick”) but I don’t think it is strictly necessary and skipping that step certainly puts hash on your table more quickly. I’m willing to bet they developed the patty method as a way of pre-making the hash to speed up things when someone orders it; avoiding starting from scratch with each order. This really isn’t an issue if you are just making it for your family. Hot Suppa’s hash featured shredded corned beef and if you have warm corned beef it is easier to shred but I was using leftover, cold corned beef so it cubed easily. Either way is tasty and gives you a bite of corned beef in every bite!