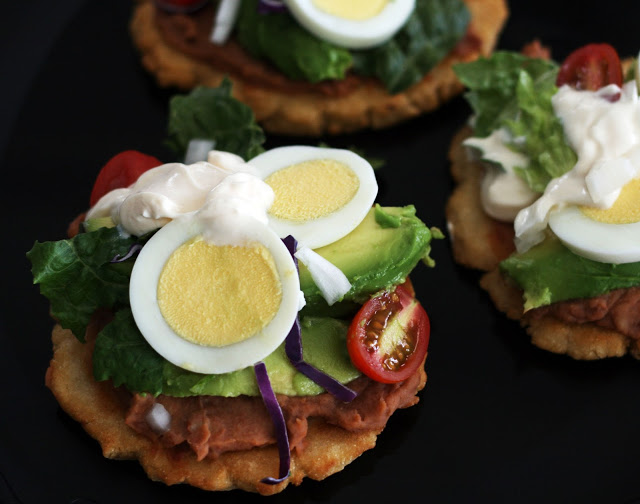 Directions:
Place the instant corn masa flour in a large bowl. Using a mixer with a dough hook, mix the flour while streaming in the warm water continuously until a soft, dry dough forms. Roll the dough into 3 inch balls. Place between two sheets of waxed paper and press with a pan until it is about 1/4 inch thick. Heat canola oil in a skillet. Add the tortillas and cook 2-3 minutes on each side until golden brown.

Unlike Mexican enchiladas, Salvadoran enchiladas feature crisp fresh ingredients layered over thick, warm tortillas and refried beans. I’ve seen a lot of versions with meat but my favorite bits are always the vegetables and the egg on top so I went with a lighter version. This version came together really quickly as well. The tortillas were remarkably easy to make and the rest was mostly heating (the refried beans Old El Paso challenged me to use in an interesting way) and assembly (pretty much everything else). I hard-boiled the eggs the night before so I just had to slice them.