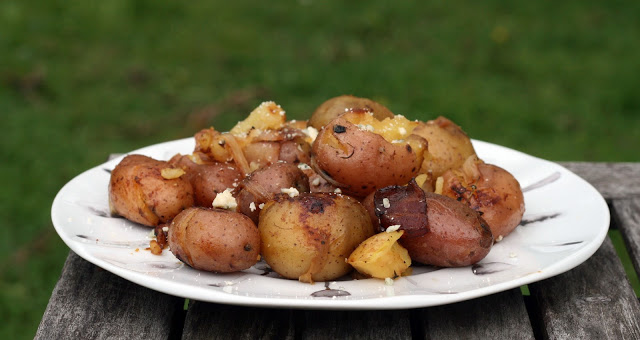 Directions:
Saute the bacon in high-walled, lidded pot until crisp. Drain the bacon grease from the pot.

In a single layer, arrange all of the potatoes and onions into the bottom of the pot.  Cook for 1-2 minutes without stirring. Add the thyme, pepper, salt and chicken stock. Bring to a boil. Reduce heat and partially cover with a lid. Continue to boil for 20 minutes or until the broth has evaporated to the point of only reaching the halfway point of the potatoes.

Carefully use the back of a spoon to gently crack the skin of each of the potatoes. Raise the heat slightly and continue to cook until all of the broth has evaporated and the potatoes  have browned on the underside, about 10 minutes. Flip the potatoes and cook the other side for about 5 minutes. Remove from heat. Sprinkle with Gorgonzola. Serve immediately.

When the folks at Betty Crocker asked me to come up with a recipe showcasing the versatility of potatoes, I knew the method I wanted to use. It is very simple but not one I see very often. You are basically braising the potatoes in just a bit of liquid then cracking their skins and allowing them to caramelize. It is based on an old French method but I jazzed it up (and honestly, gilded the lily) by adding bacon, onions and just a sprinkle of cheese at the end. The The potatoes are positively dripping with flavor and the onions caramelize with virtually no effort on your part and the whole dish is just a the most savory, smoky, decadent way to serve potatoes. I like using baby potatoes, I most often use the yellow-fleshed varieties or the mixed bag of red white and blue if I can find* them but fingerlings work well too. Don’t use cut up or whole large potatoes because the texture will not be correct and all of the yummy crispness will be missing.

*blue potatoes have been oddly absent from the stores lately, even in potato chip form. Blue potato blight?