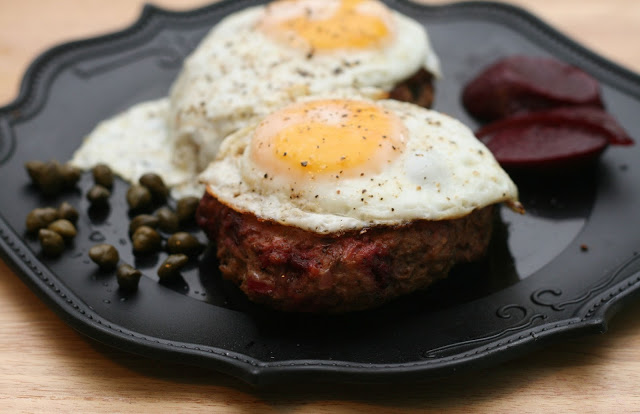 to serve:
top with fried eggs

Directions:
In a medium bowl, combine all ingredients until just mixed. Form into 4 large, flat (a little less than 1/2 inch thick) patties. Set aside. Heat some canola oil or butter in a pan. Cook the patties, turning once, until browned on both sides and fully cooked through. Drain on paper towel-lined plates if needed. Serve hot, topped with fried eggs if desired.

You all know I love Swedish food so when I was reading Aquavit’s Marcus Samuelsson’s memoir about growing up in Sweden and becoming a chef on the train the other day and he mentioned a new-to-me dish, beef Lindström, I had to make it. Apparently it was in his mom’s usual dinner rotation when he was growing up. He described it as basically a burger or meat cake “mixed with onions, capers, and pickled beets”. I love meat cakes and pickles in any form (that’s part of why I like Swedish food so much, it is heavy on the preserved foods like pickles and jam) so it seemed tailor made for me. I did a little research (thank you imperfect Google translate) on some Swedish recipe sites and came up with this. I can’t be sure it is 100% authentic (the recipes all varied a bit and I don’t read Swedish) and I used the pickles etc I had on hand but I think it is close and I know it is very, very tasty. Most of the pictures show it with a fried egg on top (the Swedes do love their eggs, another reason I love their food) so I topped mine with a peppered fried egg too. If you want to Americanize them a bit you could grill these and put them on a roll and serve them as burgers. I had planned to do this myself but we have had a bout of yucky weather lately so I panfried them instead. They were still wonderful and as an added bonus quicker to make than having to wait for the coals to heat up. I used homemade pickled beets but store bought would be fine and perhaps more authentic, Swedish pickled beets are much sweeter than the ones I’ve made. Whatever you do, you will end up with a flavorful, savory burger that will become one of your favorite comfort foods too.

Quick history lesson: the burger was introduced to Sweden in 1862 by Chef Henrik Lindström who was a Swedish man who grew up in Russia. He demonstrated the recipe in a hotel kitchen and it quickly became popular throughout Sweden. It is still found on menus (sometimes simply listed as “Lindström”) in patty form as shown here or rolled into tiny meatballs.