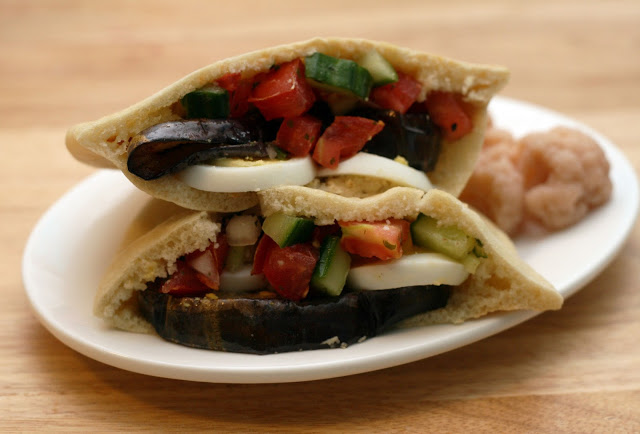 Directions:
Toss together the ingredients of the salad. Set aside.

Heat a small amount of olive oil in a large skillet. Pan fry the eggplant slices until just golden. Drain on paper towel-lined plates. Assemble the sandwiches by spreading some hummus in each half of each pita pocket and filling with eggs, eggplant and salad. Serve immediately.

I’ve been on an international sandwich kick so when I came across the Israeli sandwich, sabich, I had to re-create it at home. It contains hard-boiled eggs and eggplants, which I love, plus hummus and Israeli Salad, which include two more of my favorites, tomatoes and cucumbers. You don’t have to go all out and make the pita yourself (although they are very good, so if you have the time, do it!) as I did and if you don’t, the sandwich comes together quite quickly. While the eggplant is lightly fried, it isn’t battered which cuts down on the cooking time quite a bit. Like any sandwich there are a few variations, some use huevos haminados instead of plain hard-boiled eggs, some add pickles or amba, some add potatoes or other vegetables or sauces. There are even “sabich inspired” sandwiches on rye, whole wheat bread or even a croissant(!). But the sabich at the most basic form is what I’ve shared here; eggplant, hard-boiled eggs, and salad all stuffed in a pita. I do think grilling the eggplant instead of frying it would be a fun twist and if it wasn’t raining today, I think I would have made both the eggplant (brushed with oil) and the pita on the grill. Sabich makes a great sandwich to pack for lunches as well as the eggplant does not have to be served warm. I would pack the salad separately and add it right before serving to avoid sog. I served mine with some cauliflower pickles on the side to add a bit of punch.