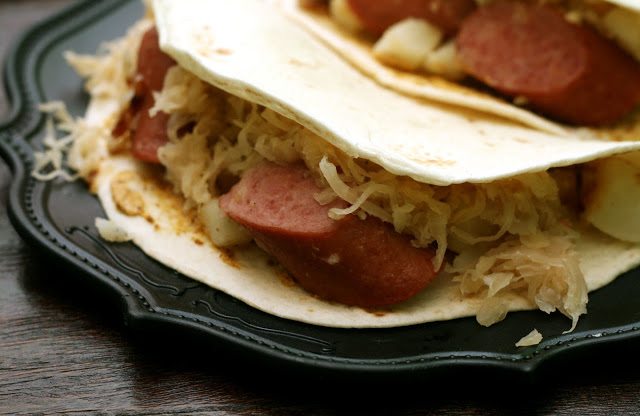 Directions:
Bring a pan of water to boil. Boil the potatoes until just beginning to soften. Drain and set aside.

Heat the oil in a large skillet. Saute the onion and kielbasa until the onions are soft and the kielbasa is beginning to brown, about 5-8 minutes. Add the potatoes, salt and pepper and saute until the potatoes are heated through and evenly distributed amongst the sausage.

Meanwhile, spread a layer of mustard on each tortilla. Evenly divide the potato-kielbasa mixture between the tortillas and top with sauerkraut. Fold to close. Serve immediately.

When my husband lived in Austin, Texas back in the dark ages before he knew me, he indulged in what was called a “German taco”. Texas has a sizable German population and when co-mingled with the Mexican population, this is what happens. You get a German sausage wrapped in a tortilla and sold a festivals. Fusion at perhaps its best. I’ve never been to Texas but I haven’t been able to get the idea of a sausage taco out of my mind. So when Old El Paso asked me to create and share a clever taco recipe, I saw my chance to make my wurst taco dreams come true. Taking a page from my own Baltimore-Polish heritage, I thought I’d make a Polish taco to put the German tacos to shame. To keep it light, I used turkey kielbasa instead but traditional kielbasa is excellent as well. I added some potatoes, onions and sauerkraut. I have to admit I was slightly skeptical but it was awesome! Not terribly different than a hot dog with kraut, just more filling, more flavorful and wrapped in a tortilla instead of a bun. I’m a fan.