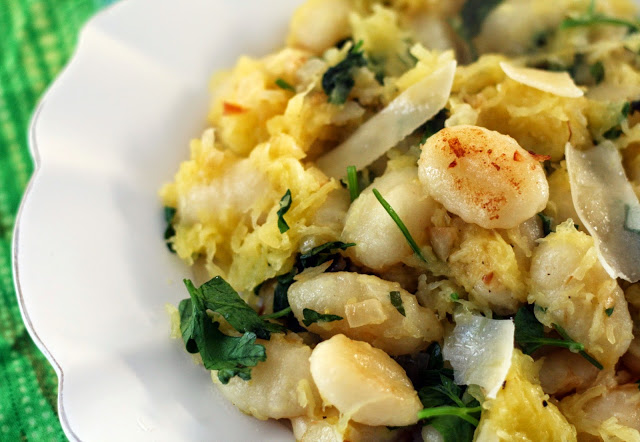 Directions:
Preheat oven to 350. Line a baking sheet with parchment paper. Scoop out the seeds and discard. Place the squash cut side down on the parchment. Bake for 30 minutes or until the skin is easily pierced with a fork. Scoop out the insides. Set aside.

Meanwhile, prepare gnocchi according to package instructions. Drain throughly. Heat the oil and butter in a large skillet. Cook the onion and garlic until the onion is soft and translucent, about 8 minutes. Stir in the gnocchi and cook until just starting to brown. Add the squash, salt, and pepper and cook, stirring occasionally, until warmed through and all ingredients are evenly distributed. Stir in the parsley. Cook 1-2 minutes until the parsley starts to wilt. Remove from heat. Stir in Parmesan. Serve immediately.

*You can make your own but for this dish, the self-stable kind in the air-tight tray is just fine.

This is another one of those surprisingly good recipes. I picked up a spaghetti squash on impulse at the store and brought it home with no idea what I wanted to do with it. I was trying to think of a hearty side dish that would be filling enough to act as lunch the following day and remembered I had some gnocchi from a mega-sized Costco purchase a while back. I had parsley and Parmesan on hand and voila, a meal was born! It is easily now my favorite way to eat spaghetti squash. I don’t think it as a pasta substitute (who are we fooling here) but it is tasty on its own and really absorbs the flavors of anything it is tossed with. I like pan-fried gnocchi the best but some times it is hard to know what to dress it with but tossed with squash was wonderful. No need for a sauce. The whole thing just came together in a really surprising and satisfying way.

Like I said, I served it as a side but it could easily be a (vegetarian!) meal onto itself.