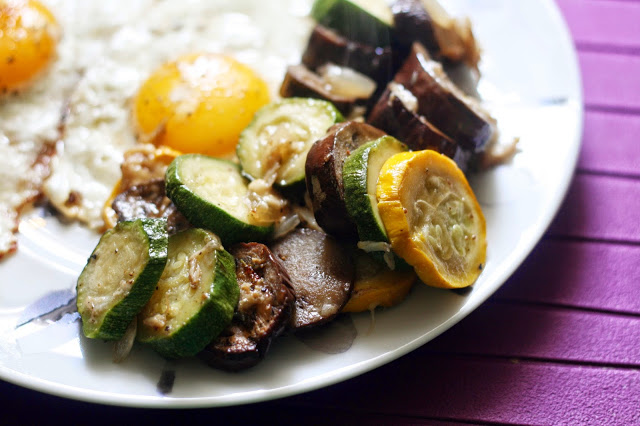 Heat a small amount of butter or oil in a small pan. Saute the onion and garlic until the onion is soft and translucent, about 5 minutes. Allow to cool slightly. Scrape into a large bowl. Add eggplant, squash, crabmeat and spices. Toss to evenly distribute all ingredients. Scrape into prepared dish. Cover with foil and bake 30 minutes. Uncover and sprinkle with cheese. Continue to bake for 15 minute or until the cheese is bubbly and the vegetables are tender. 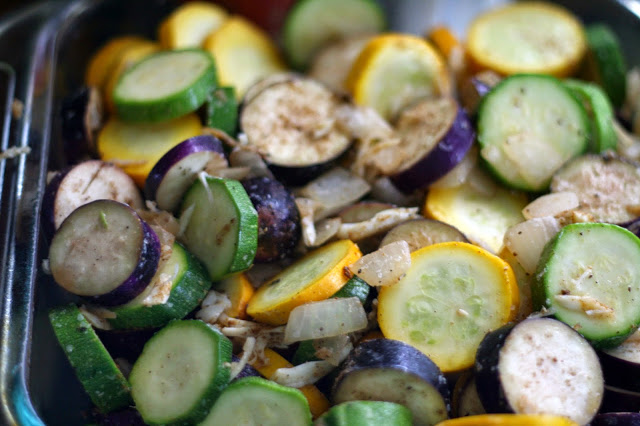 *I used leftover crabmeat from steamed crabs, it was a mix of claw and lump. It was also well-seasoned. Add additional Old Bay as needed.

This is sort of like a tian but less fussy. I simply don’t have it in me to artfully position a billion 1 1/2 inch slices of summer vegetables in a gratin dish. No thanks. This is the lazy American crab version of that but made better with crab. There is a farm stand that isn’t too far away that I like to get to during the summer months because they always have a wide range of fresh vegetables for sale. This time they had tons of summer squash: pattypan, zucchini, crookneck and a type of yellow zucchini called goldenrod. The goldenrod was the prettiest squash ever! Bright yellow and perfectly straight. You can catch a glimpse of the color in the raw veggie shot above. It tastes pretty much like regular zucchini but was easier to slice and cube since it is basically a tube; no flaring out or narrowing. I was going to make a straight squash/eggplant casserole but I had some crab meat leftover from steamed crabs (just a few crab’s worth) so I tossed that in and loved it. It is still a little light to serve as a main dish (though with a heavy grain like wild rice or kamut it might work) but the crab makes it seem like the fanciest of side dishes.