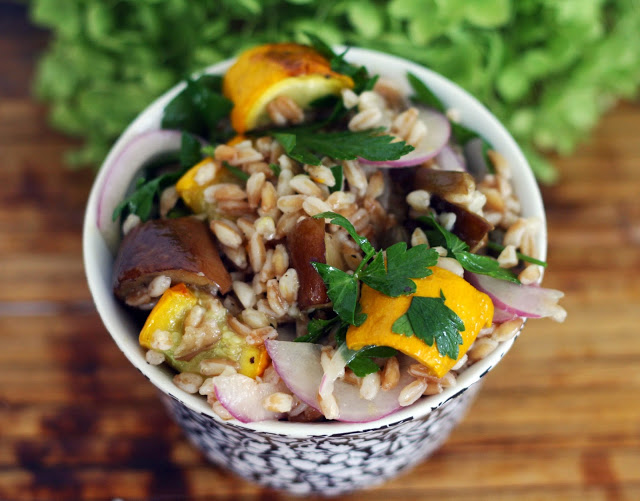 Preheat oven to 400. Arrange the zucchini and eggplant on a parchment lined baking sheet. Drizzle with olive oil, salt and pepper. Roast for 15-20 minutes or until fork tender. Set aside.

Bring 2 cups water to boil. Add farro and reduce to simmer. Cook for 15-20 minutes or until desired chewiness is reached. Allow to cool slightly.

We’ve been lucky to get such pretty eggplants and zucchini from our favorite farm stand this year. I think I’ve had them nearly every day for weeks! We haven’t had much luck growing them ourselves so this year we just decided to leave it to the experts. Why torture ourselves? This salad makes the most of the the zucchini and eggplant and is super simple. I served it as a side dish for dinner but then had it the next day for lunch. If you are having it as a meal, might I suggest putting an egg on it? You won’t regreat it although it does make this vegan dish non-vegan. If you haven’t tried farro, you should! It is chewy and I think tastier than some of the other grain salad options. I used pearled farro for this because it is a little lighter but regular farro would work as well. You may have to lengthen the cooking time for regular farro.