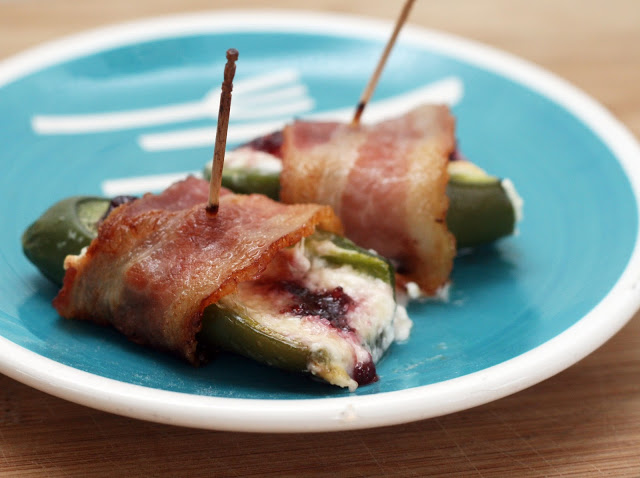 Directions:
Preheat oven to 400. Line a baking sheet with foil. Place the peppers, cut-side-up on the pan. Set aside.

In a medium bowl or in the bowl of a stand mixer, mix together the neufchatel, cheddar and onion. Spoon into each pepper, filling it completely. Spoon a small amount of jam on each pepper. Top each with a slice of bacon, tucking the ends under the pepper. Secure with a toothpick. Bake for 20 minutes or until the pepper is hot and the bacon is cooked and crispy.

*AKA light cream cheese, not the French cheese of the same name

I’ve never made too much in the way of jalapeno poppers before but when I saw some beautiful, unblemished jalapenos at the grocery store I thought they’d be perfect for stuffing. I’m going to have to get one of those jalapeno popper grill stands when they inevitably go on clearance so I can stuff them whole and grill them. Until then, I went with a baked version (although you could grill the halves if you wanted and had a flat grill pan or cast iron skillet) that could wrap in bacon. Bacon makes everything better, right? You know what makes things even better? Pairing salty, smoky bacon with sweet, juicy cherry jam. I used my homemade cherry-raspberry jam but another kind of jam like straight cherry, raspberry, peach or strawberry would be great too. It really is about the hot-sweet-smoky-salty combo.